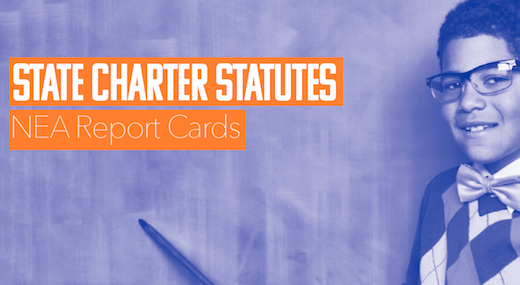 The National Education Association released its State Charter Statutes Report Cards on Thursday, May 9, 2019. See press release here. The report card provides a specific roadmap for states who want charter schools that work for all students and are accountable and transparent to taxpayers and the communities they serve. NEA believes that public charter schools must meet four key requirements: they must be:

(1) genuinely public schools in every respect;
(2) accountable to the public via open and transparent governance;
(3) approved, overseen, and evaluated by local school boards; and
(4) providers of high quality education for their students.

In 2017, these four key requirements were identified by the elected leaders of NEA’s three million members and detailed in the NEA Policy Statement on Charter Schools.

NEA’s assessment of charter school laws was limited by necessity to the terms of the statutes themselves. On some occasions, external sources were consulted to resolve ambiguity or when the statute was silent. While this review captures the statutory landscape of charter schools in any given state, it does not attempt to reflect actual compliance by charters or state or local government entities with those laws.

This report doesn’t just tell us what’s wrong, it provides 13 specific “guard rails” that states can implement to ensure their charter schools are the kind of schools students, parents and tax payers can be proud of.

These 13 metrics were derived from the NEA Charter Schools Policy Statement, created by a task force of diverse educators and leaders, including charter school educators, and approved by the NEA’s Representative Assembly.

With weak regulation and lax oversight in many states with charters, other issues of major concern to students, parents, taxpayers, and communities have emerged, such as:

There are 44 states plus Puerto Rico and the District of Columbia that have state charter school laws:

Some do not require that charters comply with the same open meetings laws and conflict of interest requirements that apply to public school boards, school districts and employees. These are commonsense protections that parents and communities rightly insist upon for all other taxpayer-funded schools.