NEA’s call to action: ‘Pass common-sense legislation so that not one more community is shattered, and not one more anguished parent has to lay a precious child to rest.’ 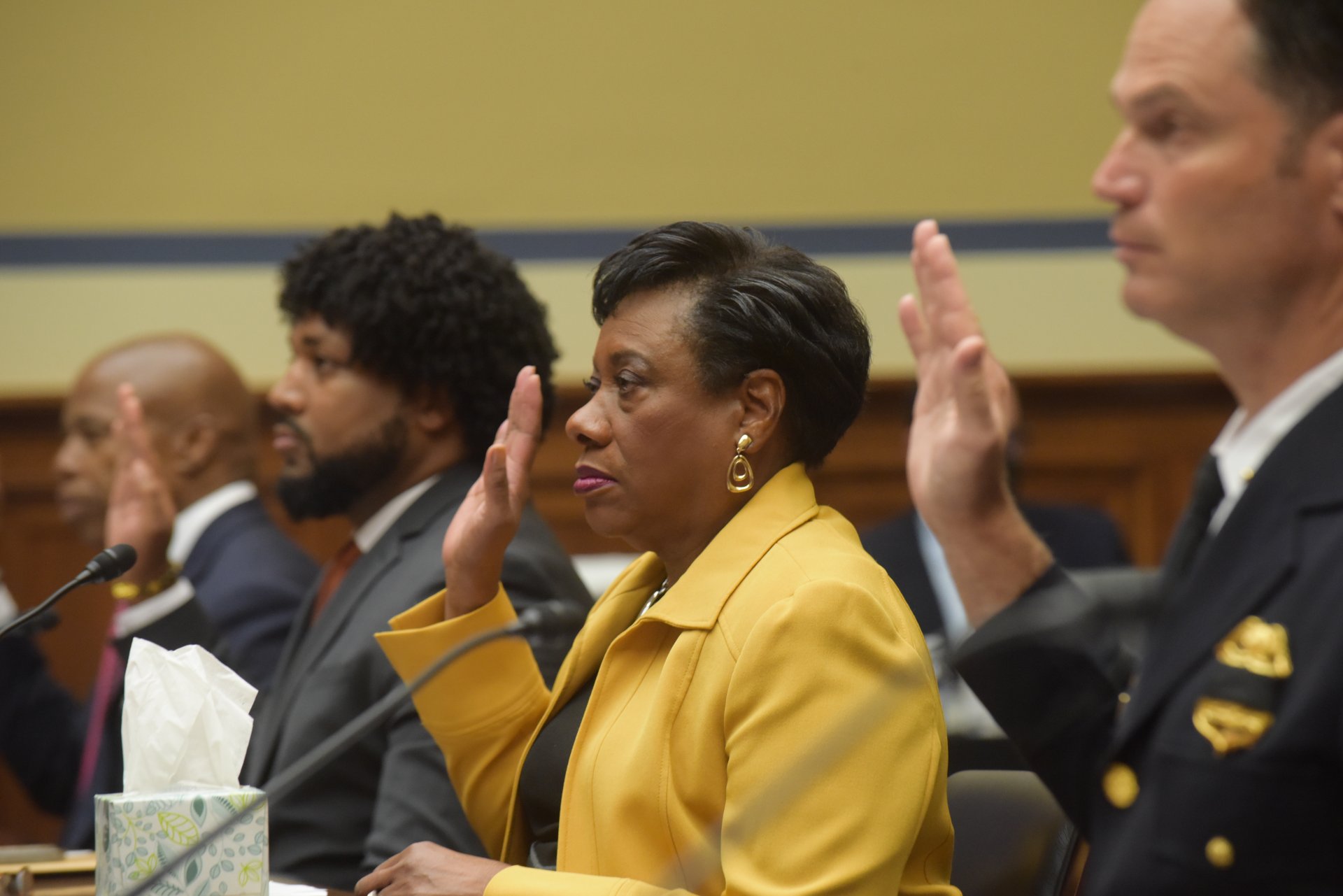 ©2022 Patrick G. Ryan/NEA. All Rights Reserved.
NEA President Becky Pringle was sworn in as a witness by the House Oversight and Reform Committee. Pringle testified on behalf of NEA's 3 million members at a hearing titled “The urgent need to address the gun violence epidemic” on Capitol Hil in Washington on June 8, 2022.
By: Staci Maiers
Share

The following is the written testimony of NEA President Becky Pringle and can be attributed to her:

“Good morning, Chairwoman Maloney, Ranking Member Comer, and members of the committee. I appreciate this opportunity to offer testimony on behalf of the 3 million members of the National Education Association — devoted educators who teach, support, and protect students across the country.

“I am honored to testify alongside such an esteemed panel, including a budding young activist. But as a teacher with three decades of experience, I am frustrated, heartbroken, and angry that this is where we are, 23 years after Columbine.

“On April 20, 1999, I had been a middle-school science teacher in Pennsylvania for 23 years. No experience or training had prepared me for the questions from my middle-level learners. As I joined my fellow teachers in shock and disbelief of the carnage that ended the lives of 12 students and one teacher, the only thing that comforted us was the belief that this society would never let it to happen again.

“Then, 32 college students and professors were gunned down at Virginia Tech.

“Twenty little ones and six staff members were killed at Sandy Hook.

“And now: Robb Elementary. Kids were giddy with excitement, celebrating the coming end of the school year. For 19 students and two teachers, it would be the last day of their lives.

“There horrific events — occurring in suburban, urban, and rural schools alike — are not isolated incidents. As the journalist Scott Pelley said, they were once so shocking, they were impossible to forget. They are now so frequent, we cannot remember them all.

“Tallying up the number of beautiful children who have died or been wounded does not begin to tell the full story of these massacres. Students are traumatized and cope with survivor’s guilt. Educators worry themselves sick wondering what they could have done. Life goes on, but life is never the same.

“Camille, a survivor of Sandy Hook, had panic attacks for years that left her breathless and triggered migraines and nausea. She collapsed in high school one day after learning that on the anniversary of the attack, Sandy Hook students were forced to evacuate because of a threat against the school.

“Camille is one of the more than 311,000 students exposed to gun violence since Columbine. Like her, many of them will be traumatized for years to come, and quite possibly for the rest of their lives.

The old “stop, drop, and roll” fire safety training has been overshadowed by training that is more relevant in 2022: “Run, hide, fight.” Students across the country are writing goodbye notes and wills, just in case.

“Unfortunately, their fears are perfectly rational. We are 25 times more likely to die by gun than are people in other developed nations. We often say that America is exceptional. But today, we are exceptional for the worst possible reason.

“This is the home of the brave. Where our inability to pass common-sense gun laws means that we are demanding that our children and their educators be the brave ones.

“Midway into the year, we have already experienced nearly 240 mass shootings, an average of more than one per day, according to the Gun Violence Archive. Last month alone, there were 65 mass shootings. Only five days came and went in the month of May without any mass shootings at all.

“However, the number of mass shootings does not even come close to capturing the true scope of this epidemic. Every day, 111 people are killed by guns. We can expect 22,255 more of our children, loved ones, and friends to die by gunfire by the end of this year. Inaction means we are willing to accept what should be unacceptable to us all.

“And this crisis is worse in Black and Latino communities, where 68 percent of adults or someone they care for have experienced gun violence. These numbers underscore a simple, straightforward, irrefutable fact: Where there are more guns, more people are killed by guns, more families are left heartbroken, and more people in more communities live in fear.

“NEA members thank the House majority for taking decisive action to address this crisis, and we urge the Senate to act as well. More than anything, Americans are desperate for Congress to come together on legislation that could help end this hellish cycle of more shootings, more devastation, more thoughts and prayers.

“I ask you: Who are you serving?

“A teacher in Arlington, Texas survived a workplace shooting in a corporate setting, only to work in a high school that has experienced three student-involved shootings and countless lockdowns. It is more than he can take. He is leaving. “As much as I love teaching,” he says, “if I can’t be fully present for my students, I am not going to be the educator they need.”

“We cannot keep dodging this issue by proposing solutions that do not get at the problem. We cannot place enough armed guards at every school building in America, or at every store, or at every hospital or concert venue to protect us. We cannot ask educators, who enter this profession to help children soar, to carry weapons and wear body armor while teaching addition or the Pythagorean Theorem. Because by the time someone has shown up at the school or the store or the hospital or the house of worship with a military weapon, it is already too late.

“Educators never lose sight of their core values or purpose. We always show up for our babies, even knowing that tragedy can strike at any time. However, educators are leaving the best profession in the world in droves…driven out by the pandemic, book bans, and the lack of respect for their expertise and experience. What we need are more resources to teach our students and support their mental health and other needs — not revolvers.

“We must finally reckon with the crisis we face. Guns are far too accessible. And they are in the hands of far too many individuals who use them to vent their rage, hatred, and frustration.

“Lately, I have been thinking of something Dr. Martin Luther King, Jr. said 50 years ago. It nearly crushes my spirit to think that his words so eerily reflect our times. Dr. King said: “The nation is sick; trouble is in the land…But I know, somehow, that only when it is dark enough can you see the stars.”

“You can help us to not only heal, but hope. Pass common-sense legislation so that not one more community is shattered, and not one more anguished parent has to lay a precious child to rest. Our children deserve the chance to grow and thrive. To live…into their brilliance. Thank you.”