It’s back-to-school time and students will soon be practicing lockdown and active shooter drills, an unfortunate consequence of a new normal in America. 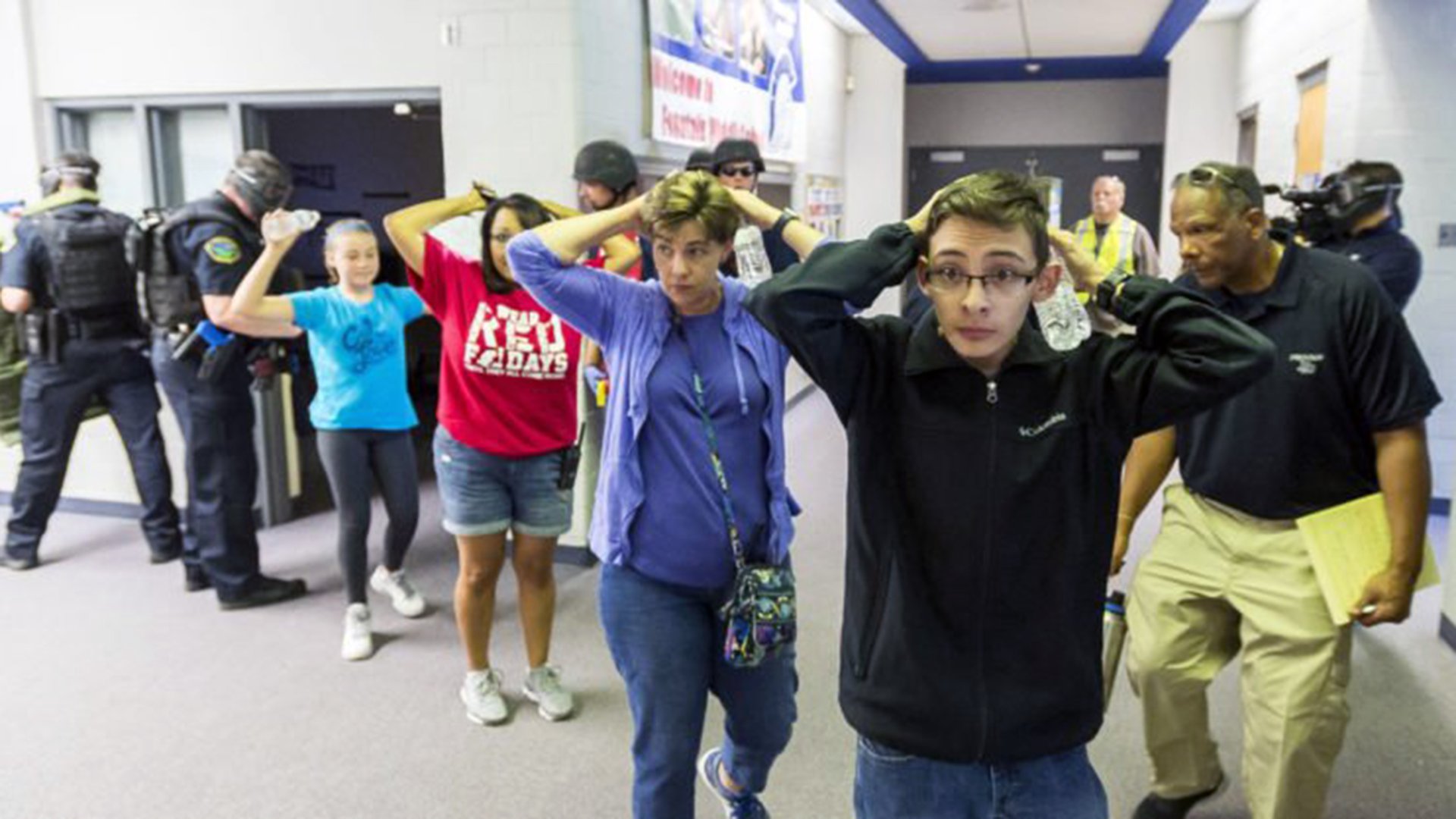 Dougal Brownlie/The Gazette via AP
"Victims" are led out as members of the Fountain Police Department take part in an Active Shooter Response Training exercise at Fountain Middle School in Fountain Colo.
By: Cindy Long
Share

It’s back-to-school time across the country and as students settle into new classes and routines, they’ll also be practicing lockdown and active shooter drills, an unfortunate consequence of what’s become a new normal in America: mass shootings.

The United States has witnessed nearly 2,200 mass shootings since the 2012 Sandy Hook massacre, according to data from the Gun Violence Archive, and gun violence is now the second-most-common cause of death for people ages 1 through 19.

With news about shootings like those in Dayton and El Paso still fresh in student minds, lockdown and active shooter drills can be traumatizing.

NEA Today spoke to Janet Shapiro, dean of the Graduate School of Social Work and Social Research, professor of Social Work, and director of the Center for Child and Family Wellbeing at Bryn Mawr College, about the impact on students.

In the weeks following a shooting, the news is impossible to escape. What affect does it have on students around the country?

Janet Shapiro: It’s important to look at the context of your students’ community. They are either directly experiencing violence or its happening elsewhere. Some are exposed to constant media coverage, while others are are not only exposed to the coverage of the mass shootings, but also live in neighborhoods where they experience violence every day -- on the way to school, in neighborhood parks and playgrounds, on the streets – spaces they occupy all the time. For those, they are already experiencing trauma. News of a mass shooting can heighten that.

One of the main things that affects kids’ ability to cope is whether they have faith in the capacity of the adults around them to protect them from danger. If they are aware of this kind of violence, particularly if it’s against other children, they will have a response.

Is there an age group particularly vulnerable to the anxiety?

JS: Children at different ages have different perspectives on the news they hear and the drills at school. Little children have a lot of confusion about what they see and hear in the news and might not be able to understand time (they think it’s happening right now) or distance (their worlds are small and they think everything happening close to where they are).

Young kids also have the greatest reliance on their parents or caregivers. After a lockdown drill at school, they may feel anxious but don’t have words to describe their fears. They may want to stay home from school because they don’t want to be separated from their caregivers. They may have somatic symptoms– headaches, stomachaches, that allow them to stay home.

During Lockdowns, Collaboration Among Staff Helps Ensure Student Safety
In today’s school climate, active shooter drills are as common as fire drills. Nine out of ten public schools currently conduct these drills, according to the National Center for Education Statistics. It is vital that all staff members be included in school crisis plans.

Consider the recent ICE raids in Kentucky. In the aftermath of something that large, the response can be significant. There is nothing more threatening to a first or second grader than the notion that their parents won’t be there when they get home. Children identify closely to each other either by age or gender or other characteristics, such as having immigrant parents (whether or not they are undocumented). The more characteristics they share, the more frightening for them.

Educators and parents should remember that they don’t have to experience it directly to have anxiety about it. Research shows that indirect exposure to a traumatic event, either through someone you know who or someone you identify with, can have a major impact.

What is the impact on older elementary school students?

JS: Starting in second and third grade, students progress toward autonomy and mastery of their environment. They have more reliance on friends and a broader social environment. But these developmental milestones of being more independent and doing things on their own can be compromised by this fear and anxiety during exposure to distressing news or during drills when they’re separated from their parents or caregivers. It can cause a regression when they’re working so hard on sense of mastery and independence. They can have a range of reactions – sometimes we see avoidance, not wanting to go to school or to their friends’ houses to play but not being able to express why. They can have sleep problems that impacts their concentration, they can become more irritable and nervous.

What can educators watch out for?

JS: From a school perspective it’s very important to know your students and recognize differences.  Are they usually able to sit still and pay attention and concentrate but have stopped listening, aren’t processing information or forgetting it? It could be caused by lots of things, but notice the timing and recent events. It could be the result of anxiety about exposure to a traumatic event.

It’s part of mastery – we practice drills so we know how to handle a situation. We need to find that balance between allowing students to feel that the school is prepared and recognizing that kids need to be reassured once we raise their anxiety. The more holistic the approach, the better it will be for everyone."

As educators, we need to understand what the manifestations may look like when kids aren’t able to express their fears. Often they’re acting out on the feelings rather than articulating them and it can be hard not to misinterpret the behavior. It takes a shared understanding in what we call a trauma informed school where everyone, whether you work in the cafeteria, on a bus, in the classroom or in the front office, is provided with ongoing training about these kinds of concerns and their behaviors.

Always be asking, what’s underneath this behavior? Is this the same behavior the child exhibited last year? Last month? If there’s a change, what has changed? How can we think together about what’s caused that change? Now more than ever we need to take the time to really listen to children and know the children. We learn a lot by observing not just talking. What do we see in their artwork and what they produce? Are there changes in the pattern or type of play? Are they hyper-vigilant or withdrawn in ways we haven’t seen before?

This may require additional staffing, support, and professional development. It requires a team and a whole-child approach. What is the student like in the classroom? How is she behaving on the bus? What about on the playground? You need a team approach to get a holistic view of the student.

If educators notice the differences and recognize anxiety or trauma, how can they help those students?

JS: Creating a secure and stable routine in the classroom, on the bus, in the cafeteria, and throughout the school environment is very important. Students need to know what to expect day-to-day. As part of preparing for drills or reacting to negative news, talk to students about strategies to handle difficult emotions. The trend toward Social Emotional Learning is very helpful. We’re helping kids identify their feelings and put words to those feelings so they’re able to talk about it.

JS: That’s a hard question to answer. Young children have a hard time telling the difference between fantasy and reality especially when stressed or anxious, which is why you hear about many younger students crying inconsolably during drills. Even second and third graders can regress under the stress of a lockdown drill and the fear and anxiety they may cause — the drill itself calls attention to the possibility of a mass shooter in the school, and kids vary in terms of their ability to reassure themselves that the drill is not real.

On the other hand, there will be many kids who are reassured by having a sense that there’s plan. It’s part of mastery — we practice drills so we know how to handle a situation. We need to find that balance between allowing students to feel that the school is prepared and recognizing that kids need to be reassured once we raise their anxiety. The more holistic the approach, the better it will be for everyone.