ESPs band together on the picket line to protest long-running, systemic disinvestment in public schools. 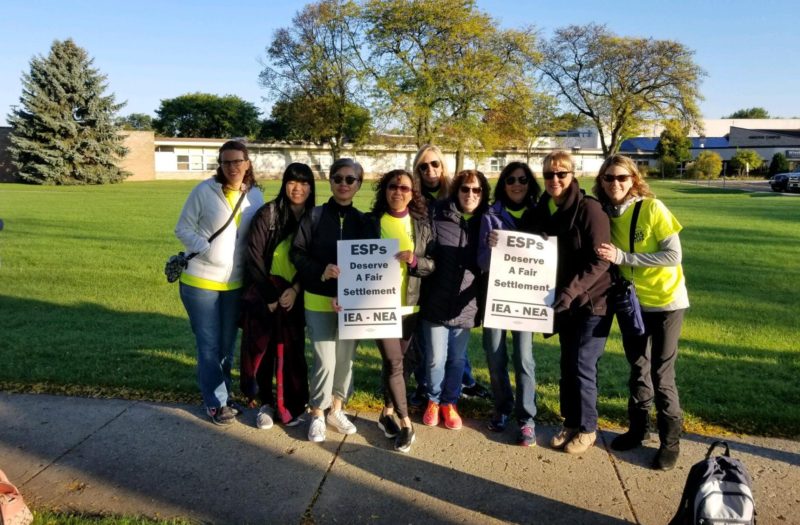 When 450 members of the Education Support Personnel Association (ESPA) in Palatine, Illinois, staged a strike last October at 20 locations, they were confronted with a judge’s temporary restraining order for 168 striking members to return to work at Palatine School District 15. The judge stated that their absence could cause a “clear and present danger” to the safety and health of the district’s special needs students. That was on day two.

“On the one hand, the district did not want to give these people a raise as low as 11 to 25 cents an hour, while on the other hand they were willing to go to court to bring them back to work because they were so essential,” says Bridget Shanahan, media relations director of the Illinois Education Association (IEA).

As the strike reached its fifth day, district officials released to the public a letter written two weeks earlier informing ESPA members that if they went on strike, all salary, health insurance (including drug prescriptions) and other “board-paid benefits shall cease for striking members.”

While district officials said they had communicated to ESPA members the ramifications they would encounter should they go on strike, members were not given a specific day when insurance coverage would halt.

“That was extremely disheartening,” Shanahan says.

Before the end of the 10-day strike, those on the picket line received seemingly random emails stating that their prescription drugs were no longer covered and that their medical co-payments would increase.

“With no paycheck and no insurance, if you’re a single mother with children, then you are in financial trouble from day one,” says paraeducator Rosella Bartoli, ESPA’s medical and financial aid coordinator. “Our insurance should not have been cancelled. It was prepaid.”

According to UniServ Director Debbie Gorecki, it was the first time in Illinois history that an employer canceled health insurance during a labor strike.

“The district weaponized insurance by cancelling it on a rolling basis,” says Gorecki, who helped facilitate the strike team. Some members learned they no longer were covered for medical services only after they tried to use their insurance cards at a drug store or other medical facility.

“There are 20 schools and they only canceled a handful of members’ insurance in each school in order to scare folks to cross the strike line,” Gorecki says. “Many members also lost wages from second and third jobs in order to participate in the strike.”

As with the success of the historic nine-day strike by West Virginia’s teachers in securing overdue pay raises and other walkouts by educators in Arizona, Kentucky, and Oklahoma, Palatine education support professionals (ESP) banded together on the picket line and in February secured a five-year contract. Like their teacher colleagues, ESPA members stood their ground under tense conditions while protesting long-running, systemic disinvestment in public schools.

District Had the Resources

District 15 is the state’s second largest school district. When the strike began October 16, the two sides were divided by retirement policies and rules over when workers would serve as substitute teachers. And by wages.

“We did the research,” Shanahan says. “The district had the money to pay for the raise.”

“Voting to go on strike was the hardest decision we’ve ever had to make at work,” says Angie Drazkowski, ESPA president. “We work hard every day to make sure our students’ needs are met, yet we are barely able to support our own families.”

Many ESPs in the district earn approximately $12,000 a year, according to media reports.

“This means most of us have to work two and three jobs to make ends meet,” Drazkowski says. “Our members work with the most vulnerable students in the district and also happen to be among the lowest paid.”

During the strike, IEA and Association locals in Illinois and across the nation contributed $70,000 to assist those on strike with various family and personal expenses.

“I’m humbled by the financial help that came in from NEA unions across the country,” says Bartoli. “We helped members with funds to buy groceries, pay utilities, make car payments … the usual daily expenses.”

“I spoke with members one on one and reviewed their bills,” says Bartoli. “It was emotionally difficult at times for me to listen to them describe the financial struggles they were facing.”

Despite tremendous hardship, fewer than 20 employees crossed the picket line, according to news sources. Before the end of the strike, the judge withdrew the restraining order and the 168 nurses and paraeducators returned to the picket line.

The contract agreement reached February 15 is retroactive to when the previous contract expired last June. The agreement includes a two percent average annual wage increase, single-employee health insurance (fully paid by the district), and stipulations of fulltime status at 5.5 hours per day or 27.5 hours per week. Also, up to eight ESPs per year will be eligible for a $9,000 retirement bonus with the provision ending 2020.

“With that, we can now focus on rebuilding and reconnecting with the district,” Drazkowski says.

Each of the 20 school buildings in the district have one or two ESPA building representatives.

“With so many members spread out across the district, a lot of us didn’t know each other,” says Bartoli, who works at Lincoln Elementary School. “The strike helped bring us together. A lot of friendships were made.”

In addition, Bartoli stresses that the new contract is meant to help attract and retain the best and brightest ESPs possible.

“The district should want to have more consistency in the lives of our students,” says Bartoli, who has worked in the district for 18 years. “We are neighbors to these kids and their families. We know their older brothers and sisters because we were here when they came through these schools.”

“We want to be here for students on a long-term basis so they can get to know and trust us throughout their school years,” she adds. “How much is that consistency worth to students and the district? A lot I would think.”