The Making of the Student Debt Crisis, Explained

The author of "The Debt Trap," a book that describes how the federal student loan program became a "national catastrophe" and offers solutions to the problem, recently met with members of NEA's National Council of Urban Education Associations. Today, he sits down with NEA Today. 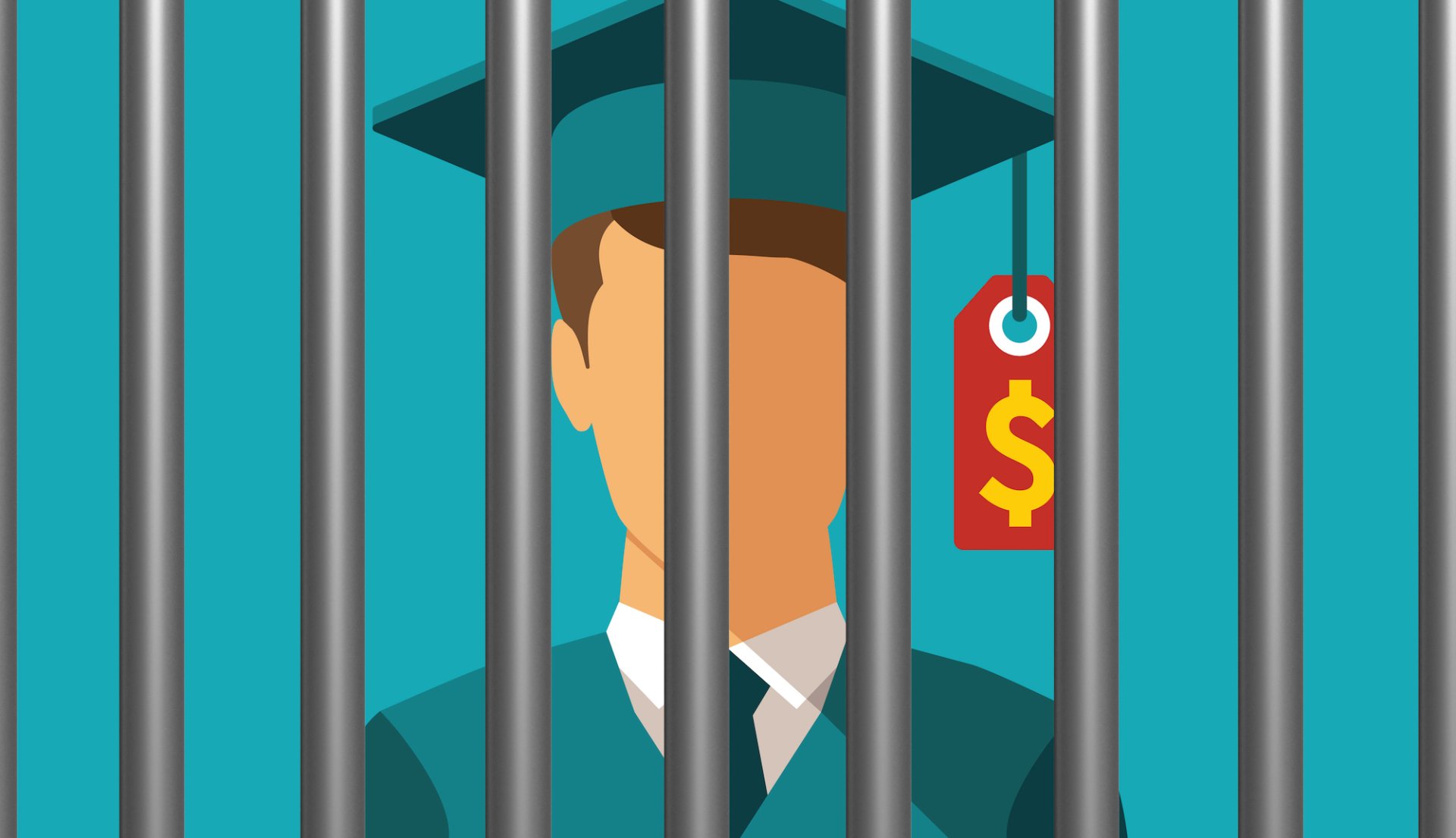 In his book “The Debt Trap: How Student Loans Became a National Catastrophe,” Wall Street Journal reporter Josh Mitchell recollects more than 50 years ago, when Russians sent a dog into space and American politicians determined to better educate their future astronauts and innovators. With the goal of positioning the U.S. as a world power, Congress created a student loan program that enabled broad access to U.S. institutions, but also fueled a juggernaut of bank profits and tuition hikes. Today, Americans collectively owe $1.6 trillion in student debt, and it is a problem that deeply affects educators, of all ages and races.

Mitchell, who met with educators from NEA’s National Council of Urban Education Associations in December, sat down with NEA Today to talk about the history of this crisis and possible policy solutions.

There’s a sentence toward the beginning of the book where you write: “Policy makers [of the 1960s] found themselves in a bind that endures to this day, caught between the ambition to provide universal access to education and the need to pay for it.” Do you see a continuum between Lyndon B. Johnson, who launched the first federal student-loan program, and today’s administration—and are the problems of today essentially the same problems of 50-plus years ago?

Josh Mitchell: Yes! If you look at the Congressional transcripts, one of the more eye-opening things you’ll find is that the arguments being made today are the same arguments being made back then, by the same sides, and we never resolve them. In our country, in general, we don’t like to make tough choices. And, lo and behold, when we don’t make those choices, negative consequences happen—and then we still avoid doing the things we need to do.

Something that struck me in the book is how much the student-loan system was designed by Congress to protect banks. Borrowers can default and owe for the rest of their lives, but banks will never, ever lose money. Lending money to students is a completely risk-free investment for them. Is this something you already knew when you got into the writing of the book or is it something you uncovered during your reporting, and how did it you make you feel as a regular person, and say not a bank shareholder?

JM: The more I unpacked the history, the more I was like wow, Sallie Mae was really in the driver’s seat [when Congress created the student-loan program]…They were the biggest player and such a heavy lobbying force. When I called Alice Rivlin [the late economist who provided the ideological framework for the partnership between Congress and banks] initially it was because I wanted to understand how the budget worked. And she was like, it’s interesting you called me because I put together this report on the foundation of the program—and that report explains how Sallie was created in the 1970s by Congress to funnel money from taxpayers to colleges and universities. Probably Bill Ford [the late Michigan Congressman] said it best when he said, “This is basically a money-laundering operation!”

The moments I was most outraged were when students would tell me their stories. When you get to know these students and their backgrounds, you get defensive about how screwed-over they are. I remember when Charles [a University of Alabama graduate] told me, ‘the university had this fee and I couldn’t pay it because I had to cremate my dad, so they wouldn’t allow me to cross the stage at graduation, but my stepdad came down and I dressed up and we walked around campus and took some photos…’ I went home that day and cried. This guy is an upstanding guy, and the university knew his dad had died, and they wouldn’t allow him to cross the stage. That’s just cruel.

Speaking of Alabama, the image of the “Disneyfied” campus that you portray is striking and you point out how much states have cut funding to state campuses. It begs the question: what does it means to be a state university anymore?

JM: The main reason I focused on Alabama was because it’s Carl Elliott’s alma mater, so in some ways it inspired the student loan program. [Elliott was a Southern Democrat who fought for a universal scholarship program in the late 1950s.] I wondered what has Elliott’s inspiration turned into, 60 years later? It’s easy to paint with a broad brush. I don’t think every university is the exact same, obviously. But I did want to tell good stories and make points through storytelling, and I thought Alabama provided an extreme example of how public education has become commodified. It’s a good example of a college that has been led astray from its initial mission.

It does raise questions: What is the role of the state flagship university? A lot of flagships are still very exclusive, and that is exactly what the founders of the student-loan program were working against. The rationale in Rivlin’s report was to get flagships to open their doors to the poor and to Black students.

You write about income-based repayment (IBR) and how much our collective debt increased after the development of IBR… but you didn’t talk much about the federal Public Service Loan Forgiveness program, which is a big deal to educators and other public-service workers. Do you have any thoughts on that program?

JM: If you’re lucky enough to get it, good for you. But it feels like an arbitrary escape hatch to me. What about everybody else? I’ll put it this way, if you work for Johns Hopkins, you get PSLF. If you happen to work for the hospital next door that is owned by a private corporation, you don’t—but you’re serving the same people.

I’m very sympathetic to teachers and people who want to take advantage of the program. And I think there’s a problem when people are told ‘here are the rules,’ and then the rules change. I think they have every right to be upset when they’re told, ‘wait a minute, you don’t actually qualify.’

But I don’t think PSLF is the answer. If you want to incentivize people to become teachers, just pay them more!

Let’s talk about some of your proposed answers to the debt crisis, especially around the racial disparity. You note a few times in the book how Black students are more likely to borrow and more likely to default. What are some of the policy answers that could help? And what would not help?

JM: I don’t think raising Pell Grants is the answer. There’s an issue that we’ve seen: you give students more money, whether it’s loans or grants, and colleges just raise their tuition. I also don’t think it’s a good idea to give community college students loans, given the high dropout rate among those students. Why give somebody a loan that you know they’re going to default on?

I do think free community college is an answer. If we decide, as a society, to give everybody access to higher education—and it seems like we have decided that—then why not fund up community colleges? I think that would really give a step up to people who are growing up without money.

There are some great things happening in community colleges. I wrote about an apprenticeship program in Kentucky... I’ve also written about Kalamazoo, Mich., which has a privately funded free-community-college program. The results have been mixed: what we learn from Kalamazoo is that you can’t just provide free college, you also have to provide counseling and the support students need.

There are some other recommendations in the book: I think the government should get out of grad-student lending.  I think colleges and universities need to put up some of their own money; if loan defaults were going to cost [the institutions], they’d be less likely to make reckless loans. I also think states and cities need to step up. And I think Congress needs to write off the interest that has accumulated on loans and give people a fair shot at paying off their balances.

I also believe some modest amount of cancellation—like $10,000—would be helpful, especially to minority borrowers who we know default disproportionately. If the government were a private lender and these were private loans, this is exactly what they would do. A private lender would acknowledge that this is bad debt, 'let’s stop pretending it’s going to be repaid,' and they’d wipe it off the books.

But I don’t think forgiving all student debt is the answer. How does that help next year’s students who take out $150,000 in debt? There needs to be a broader discussion of these issues and the solutions to them.