Connecticut social studies educator is honored for her commitment to community service and efforts to promote teaching as a profession. 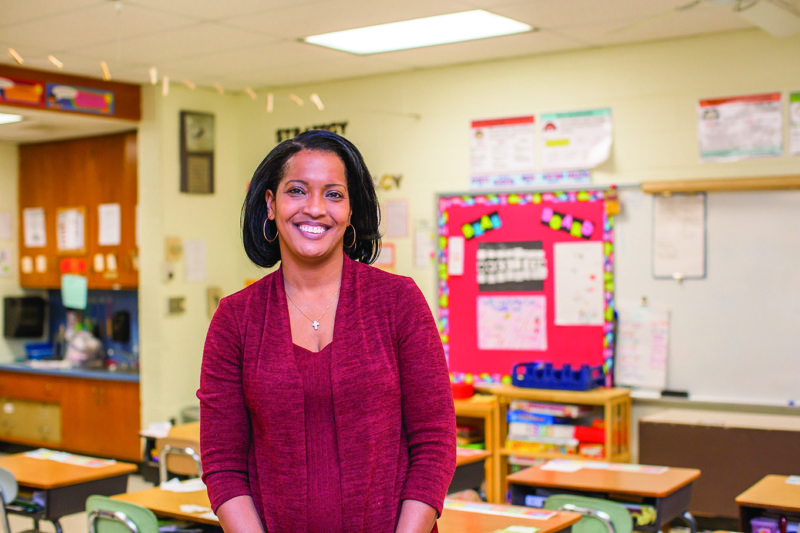 Jahana Hayes, a social studies teacher at John F. Kennedy High School in Waterbury, CT., was named the 2016 National Teacher of the Year on Thursday  by the Council of Chief State School Officers (CCSSO).

Hayes, a member of NEA’s state and local and affiliates, the Connecticut Education Association and the Waterbury Teachers Association, will be honored by President Barack Obama at the White House on National Teacher Day on May 3, during National Teacher Appreciation Week.

“Jahana Hayes is a shining example of the exceptional teachers who encourage their students to strive for their dreams and never give up, no matter what card they’ve been dealt,” said NEA President Lily Eskelsen García. “On behalf of the National Education Association’s three million members — Jahana’s colleagues — we want to congratulate her on our profession’s most prestigious honor.”

Hayes’ career as an educator goes back 13 years with the most recent 11 years in Waterbury. She has taught World History, Roots of American Citizenship, U.S. History, Civics & Geography, and African American History.

Throughout her career, Hayes has been honored time and time again for her unwavering dedication to her students inside and outside the classroom - a commitment Hayes inherited from the teachers who saw in her the potential to overcome the abject poverty that surrounded her childhood.

“Teachers exposed me to a different world by letting me borrow books to read at home and sharing stories about their college experiences,” said Hayes. “So many things that [teachers do] fall outside of traditional teaching responsibilities. It is those times when I am transformed into an advisor, counselor, confidant and protector.”

One of Hayes proudest accomplishments is her students' enthusiasm for community service. Although she initially didn't expect her work and influence to extend beyond the classroom walls, Hayes has always encouraged students to be active players in making their neighborhoods a better place through multi-faceted service projects for Habitat for Humanity, Relay for Life and the American Cancer Society. The satisfaction that comes from watching "students take ownership of their community is unmatched," said Hayes.

Hayes also served for seven years as the lead teacher for the district’s after-school programming, and has contributed to the district's efforts to recruit more minority teachers. In addition, Hayes, who mentors new teachers, is currently assisting in establishing district-wide mentorship programs. Passionate about promoting teaching as a profession, Hayes has helped secure grants to advocate for education careers, especially for minority candidates.

“We are extremely proud of Jahana’s achievements and her unyielding passion for all of her students,” said CEA President Sheila Cohen. “She is dedicated to the teaching profession and committed to being the best role model possible for her students."

Having Hayes in Waterbury's classrooms is a privilege no other district in the nation can tout, said Superintendent Dr. Kathleen M. Ouellette, and "the students of Waterbury are the benefactors."

"She is a consummate professional who demonstrates daily that she genuinely believes that the complexity of our work demands tapping into the knowledge and experience of the collective rather than relying upon those of the one person in charge," said Ouellete.

Hayes will spend the next year traveling the nation to represent educators and advocate on behalf of public education. As a leading spokesperson for the teaching profession, she hopes to encourage more people to follow her path into the classroom.

In her application to be named Teacher of the Year, Hayes wrote, “Being constantly faced with negative media perceptions surrounding teaching practices and a perceived lack of accountability makes me much more determined to be vocal and supportive of teachers and teaching as a profession.”