President Obama Honors 2016 Teacher of the Year, Thanks All Educators

On National Teacher Day, "let us ensure our educators know how much we value their service in the classroom," Obama said. 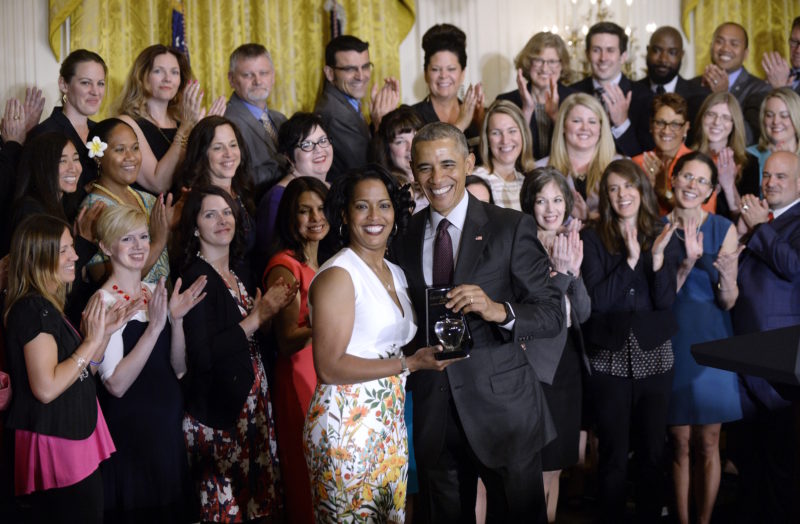 President Barack Obama honors the 2016 National Teacher of the Year Jahana Hayes of Connecticut and finalists during an event in the East Room of the White House on May 3, 2016 . (Photo by Olivier Douliery/Pool/ABACAPRES.COM)

At a White House ceremony coinciding with National Teacher Day on May 3, President Barack Obama honored the 2016 National Teacher of the Year Jahana Hayes and public school educators everywhere.

“Every year on this day, we say publicly as a country what we should be eager to say every day of the year, and that is: Thank you,” Obama said.

Obama saluted Hayes, a social studies teacher in Waterbury, Connecticut, not only for her talent but for her perseverance. Being a teacher was the furthest thing from her mind when she was growing up. In fact, there were times when Hayes didn’t even want to be a student. As a teenager, Hayes became pregnant and probably would have dropped out of school, but thanks to her teachers she finished her studies.

“Her teachers saw something. They saw something in her," Obama said. "And they gave her an even greater challenge, and that was to dream bigger and to imagine a better life. And they made her believe she was college material and that she had the special gift to improve not only her own condition, but those around her."

As a teacher, Hayes understands how and why students bring their own challenging circumstances into the classroom. "She meets them where they are," Obama continued. " And she sees a grace in them, and she sees a possibility in them. And because she sees it, they start seeing it. That’s what makes Jahana more than a teacher; she’s a counselor and a confidant. That’s how a woman who became a teenage mom is now a mentor to high schoolers in the same city where she grew up.”

"I know what it feels like to have a dream and exist in an environment where nothing is expected to thrive," Hayes said. "I know what it feels like to struggle to find sunlight and constantly be met with concrete barriers. I see myself in every one of those students, and I carry my own experiences as a reminder that as a teacher I have to be better."

As the 2016 National Teacher of the Year, Hayes, whose career as an educator goes back 13 years, will spend a year traveling the nation to represent educators and advocate on behalf of teachers. Hayes looks forward to sharing her belief in the importance of service-learning, and in making the teaching profession more attractive and appealing to young people across all demographics.

“Jahana Hayes is a shining example of the exceptional teachers who encourage their students to strive for their dreams and never give up, no matter what card they’ve been dealt,” said NEA President Lily Eskelsen García.

Throughout her career, Hayes has been honored time and time again for her unwavering dedication to her students inside and outside the classroom – a commitment Hayes inherited from the teachers who saw in her the potential to overcome the abject poverty that surrounded her childhood.

“Teachers exposed me to a different world by letting me borrow books to read at home and sharing stories about their college experiences,” said Hayes. “So many things that [teachers do] fall outside of traditional teaching responsibilities. It is those times when I am transformed into an advisor, counselor, confidant and protector.”

One of Hayes proudest accomplishments is her students’ enthusiasm for community service. Although she initially didn’t expect her work and influence to extend beyond the classroom walls, Hayes has always encouraged students to be active players in making their neighborhoods a better place through multi-faceted service projects for Habitat for Humanity, Relay for Life and the American Cancer Society. The satisfaction that comes from watching “students take ownership of their community is unmatched,” said Hayes.

During National Teacher Appreciation Week, Obama called on Americans to recognize the hard work and dedication of our nation's teachers and to observe this day and this week by supporting teachers through appropriate activities, events and programs.

Here’s How You Can Thank a Teacher:

Join our 2016 #ThankATeacher Campaign. Share pictures of yourself with your favorite teacher, or your child’s favorite teacher, on Pinterest, Facebook, Instagram and Twitter. Don’t have a picture of a teacher? Take a photo holding a note thanking a great teacher. Use our Teacher Week cover image on your social media accounts or post this graphic. Be sure to use the hashtag #ThankATeacher when sharing.

You can also join the U.S. Department of Education’s efforts to thank educators by telling them about a special teacher you know. Petition your local representatives to make National Teacher Day official in your state. Support public education by donating to the NEA Foundation to provide professional development opportunities for educators.

Doesn’t matter how you do it – just be sure and thank a teacher this week. See how others are celebrating Teacher Appreciation Week here.