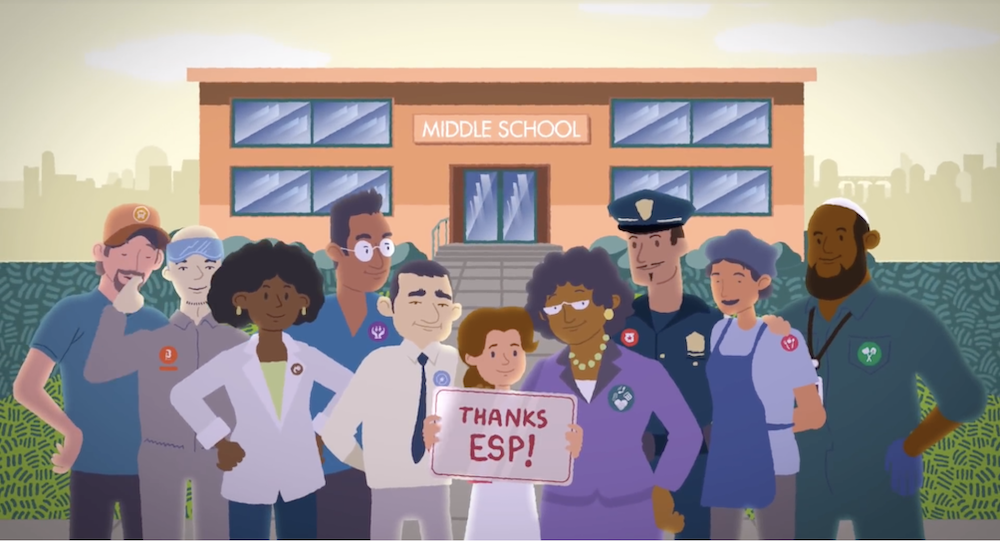 (Update 3/28: The U.S. Senate approved the Recognizing Achievement in Classified School Employees Act (H.R. 276), legislation that provides long-overdue recognition for the outstanding contributions of education support professionals and classified school employees to the nation’s public schools and the students they serve. On February 25, the U.S. House of Representatives overwhelmingly passed H.R. 276 by a vote of 387-19.The bill has been sent to the president for review.)

A bill introduced during the first week of the new Congress directs the Secretary of Education to establish an award that acknowledges the role education support professionals (ESP) play in promoting student achievement, ensuring student safety, and helping to establish a healthy school climate in grades preK-12.

Although the RISE (Recognizing Inspiring School Employees) Award Program bill (H.R. 276) arrives on Capitol Hill amid intense gridlock, strong support from the bill’s sponsor, Democrat Rep. Dina Titus of Nevada, and 21 co-sponsors gives many ESP hope they will finally receive a type of national recognition on par with teachers.

“There are almost 3 million ESP working in our nation’s public schools and colleges who make a difference every day in the lives of their students,” says Sherry Shaw, 2018 NEA ESP of the Year. “They need to be recognized for their above-and-beyond acts of heroism.”

One of every three public school employees is an ESP with more than 75 percent ensuring student and school safety. According to NEA research, almost 50 percent of ESP have an associate’s, bachelor’s, or more advanced college degree. In addition, more than 60 percent have taken college courses, while others (51 percent) have taken job-related classes, or have earned education-related certificates and licenses.

“ESPs choose public education as their career,” says Dan Kivett, a security officer at Citrus Valley High School in Redlands, Calif., and president of the Redlands Education Support Professionals Association (RESPA). “They have to train and attend school in order to maintain a high skill and knowledge level just like those in other professions.”

Above and Beyond the Call

Kivett says many ESPs are also student mentors, athletic coaches, community volunteers and organizers. According to NEA, 35 percent of ESP volunteer to read books to students while 70 percent assist children in their communities with clothing, food and other necessities.

“And all of this is done without much recognition,” says Kivett, a member of the NEA board of directors with 19 years of public education experience. “They are the gears that keep school operations moving.”

More than 65 percent of ESP donate money out of their own pockets to help students purchase classroom materials, field trip tickets, and materials for science and other class projects. The average ESP donation: $217 per year.

“The RISE award would draw some attention to the level of our professional training, mentoring, volunteerism, and how much we love our kids,” says Shaw, a special education paraeducator, coach and mentor at Tanaina Elementary School in Wasilla, Alaska. “Some parents know that ESPs go the extra mile for their kids, but not all administrators acknowledge it for some reason.”

“We don’t necessarily need an award for the work we do, but it would be nice to be recognized for all of the extra effort we put forth on behalf of students,” says Mary Ann Rivera, a paraeducator at Lyons Township High School in Western Springs, Ill.

When Rivera goes shopping, it is a given she will buy gloves, socks, hats and other items for students in need. It is also normal operating procedure in her school district for ESP to organize dozens of care packages for students from low-income families.

“ESPs work just as hard as all educators, side by side with teachers,” she adds. “In classrooms, paraeducators are an extra set of eyes, trained to help students learn their lessons well. We are not volunteers as in decades past. This is our career.”

In Kentucky, Lakilia Bedeau is director of the Tornado Alley Youth Services Center at Paducah Tilghman High School. She says Congress should acknowledge the essential services that ESPs provide by approving the bill.

“The award is long overdue,” says Bedeau, an executive committee member of the National Council for ESP (NCESP), which advocates for ESP from within NEA assuring that specific ESP issues and interests are integrated in NEA programs.

Like youth services staff across the nation, Bedeau helps students with everything from medical and other referrals for social, physical and mental health services to intervening during family crisis situations and providing hygiene products, school supplies and other daily necessities students would otherwise go without.

More than 65 percent of ESP donate money out of their own pockets to help students purchase classroom materials, field trip tickets, and materials for science and other class projects. The average ESP donation: $217 per year.

“Like the majority of ESP, my team is on the front-line assisting students with everyday needs,” says Bedeau, who has worked in education for 10 years.

By working one-on-one with students, Bedeau says a level of trust and confidence can develop which helps keep students interested enough in school so as not to drop-out.

“We empower students by removing non-academic barriers, encouraging them to explore career opportunities and reach their full potential,” she says. “We build critical relationships that ensure students are safe and successful regardless of their socio-economic status.”

Rivera says though it takes time to gain the trust of students, the reward is "priceless."

“When they first meet you, they might hate you,” says Rivera, an NCESP executive committee member. “But it’s not personal. You encourage them to do well by showing and telling them that they are valued and smart, and by the end of the year they love you.”

After more than 30 years of working for public schools as a paraeducator and school bus driver, Ernest Jameel Williams is encouraged by the proposed bill despite the divisive state of national politics and past failures by Congress to pass legislation that would acknowledge ESPs same as their colleagues are with the National Teacher of the Year Award.

“People have worked hard over the years advocating for an award like this,” says Williams, the 2011 NEA ESP of the Year. “Congress should once and for all pass this bill that acknowledges the hard work, dedication, skills, and expertise of ESP.”

Williams, who is a Reach Associate at Zeb Vance Elementary School in Kittrell, N.C., says ESP not only help to teach students but “we are in the trenches when an emotional crisis occurs involving a student or their family. They depend on us.”

In May of 2018, Sherry Shaw and four other ESPs received a national award in a ceremony at the U.S. House of Representatives. The ESP award was created by the National Coalition of Classified Education Support Employee Unions and currently goes by the same name proposed in H.R. 276: Recognizing Inspiring School Employees (RISE). Future distinctions between the two awards will be determined.

Sign up at the NEA Legislative Action Center to support the RISE Award Program bill.