By making mental health an "excusable absence," schools can help bring conversations about student mental and behavioral health into the open.

As more school districts across the country implement programs to address student mental health, cutting through the stigma that surrounds this issue is a formidable challenge. Too often a discussion about mental health is constrained by uncomfortable silences, suggestions that teenagers are maybe just lazy or incapable of handling any sort of pressure, or just outright denial.

This past summer, a group of students in Oregon did their part to help open up the conversation. They successfully lobbied the state legislature to pass a law that added mental health to the list of excusable absences. When the bill was signed into law in June, Oregon joined Utah as the one of the only states in the country to establish mental health days for students.

To skeptics, the law seemed unnecessary (many schools already permit these absences) and liable to spark a surge in absentee students.

Supporters say these concerns miss the point. The law is important because it opens up lines of communication, says Debbie Plotnick of Mental Health America. She hopes the change will help kids feel more comfortable talking with their parents and teachers.

"Acknowledging that students may be experiencing a mental health issue and allowing them to be excused to tend to their mental health encourages conversations with parents. It also allows for excused absences for appointments to get the help they may need," Plotnick said.

As Oregon high school junior Leina McLaughlin told a local news station after the bill's passage, "It tells me that my mental health comes before my school health and if that means staying home for a day and recuperating...that's OK."

Last June, the Journal of the American Medical Association published a study that found the teen suicide rate was at its highest level in almost two decades. Analyzing data from the Centers for Disease Control, the researchers concluded that there were 47% more suicides in  2017 among young people aged 15-19 than they were in 2000. 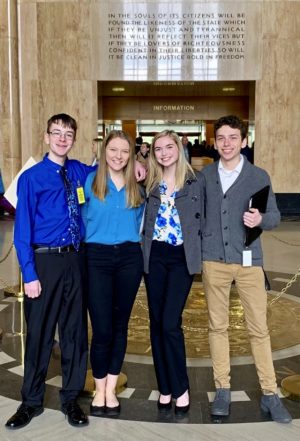 In Oregon, suicide is the second leading cause of death among this age group. According to a 2017 Oregon Healthy Teens Survey, 18% of high school juniors and 17% of 8th graders reported that they had "seriously considered" suicide in the previous 12 months. The percentages were even higher for LGBTQ youth.

For the students who led the charge on the mental health day bill, the urgency wasn't just about statistics.  A number of suicides had jolted their communities. They also had been exhausted by school pressures and were increasingly alarmed by the anxiety levels they had seem in their classmates.

The campaign for the new law was launched at a five-day leadership summit in 2018 organized by the Oregon Association of Student Councils. Tackling mental health needs in school was a hot topic at the gathering. A group of students got to work designing a bill that permitted students to take five excused absences (a sick or mental health day) over a three-month period. They began lobbying lawmakers in February.

The bill, which didn't actually change the number of days a student can be absent from school, quickly won support in the legislature. In June, Governor Kate Brown signed it into law.

Calling It What It Is

Spurred by the students' inspiring leadership and commitment, the legislation attracted national and even international attention.

Other states have taken notice.

Acknowledging that students may be experiencing a mental health issue and allowing them to be excused to tend to their mental health encourages conversations with parents." - Debbie Plotnick, Mental Health America

Last month, a  lawmaker in New York introduced a similar bill. "We need to recognize suicide and self-harm among young New Yorkers as the major public health crisis that it is, demolish the stigma around mental health care and do everything within our ower to help kids who are struggling seeking treatment, said Brad Hoylman, the bill's sponsor.

According to reports, passage is far from certain due in part to lingering fears over students taking advantage of the policy. This was a concern that the Oregon students had to put to rest.

The bottom line, said John Larson, a high school English teacher and President of the Oregon Education Association (OEA), is that student mental health days "help reduce the stigma and will help make school environments as inclusive and supportive as possible.”

Along with its support of the new law, OEA has helped move the issue of student mental health front and center with its campaign for more school funding.

“We’re focused on improving mental and behavioral health supports for our students because our schools are in a crisis of disrupted learning," Larson explains.  "Students are coming to school with unmet needs we can’t manage in the classroom alone. They deserve well-rounded services and supports like psychologists, nurses, school counselors, and smaller class sizes so they can have the individual attention they need."

In September, OEA led the way by securing passage of the Student Success Act.  This historic funding law invests an additional $2 billion in the state's public schools.  The new funding will help reduce class size and restore arts and music programs, and a sizable chunk will go toward long overdue mental and behavioral supports for students.

Even as states look for new revenue streams for these programs, experts see other bright spots across the country. Several states have mandated mental health education in schools, although many districts have already added it to their curriculum. Schools are forging community partnerships to provide a more comprehensive services. Homework loads are being reduced. Educators are talking about student stress levels. Trauma-informed classrooms are emerging in schools across the country.

Overall, schools have been helpful in educating students, teachers and staff about the urgency behind mental health, says Debbie Plotnick, and "helping to link students to resources rather than punishing them."

In the bigger picture, supporting students' mental and behavioral health isn't going to begin and end with mental health days. Still, Plotnick and other experts hope other states follow Oregon's example in taking this relatively modest but important step.

"Schools are where kids are. Recognizing mental health needs in themselves and others is proving to be one of the best stigma busters.”