The pandemic and ensuing economic crisis threatens the gains made possible by the #RedforEd movement. The country cannot afford to take its foot off the pedal of progress, says NEA president. 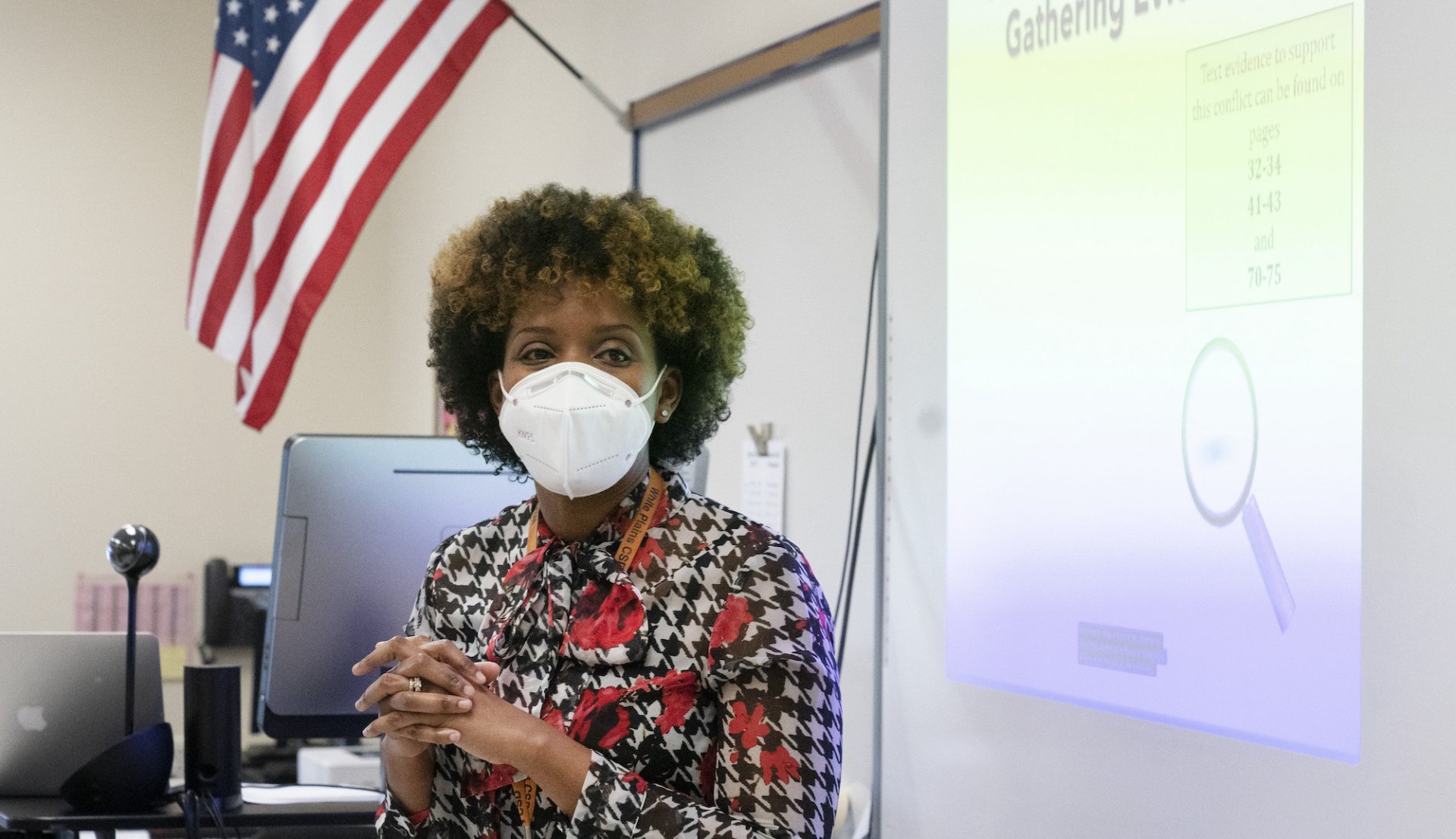 According to NEA’s annual Teacher Salary Benchmark Report, also released Monday, there is encouraging news on the salary front for newer educators as well. In 2019-2020, the average starting teacher salary across the United States was $41,163, an increase of 2.5 percent over the previous school year. Adjusting for inflation, it represents the largest annual increase in starting pay since before the Great Recession.

These modest but positive trends also were detected by the Economic Policy Institute (EPI), a Washington D.C-based think tank that for years has been tracking the teacher “pay penalty”—the percent by which public school educators are paid less than other college-educated workers with similar experience. In October, EPI found that this pay gap decreased nationally from 22 percent in 2018 to 19 percent in 2019.

Many researchers, including EPI’s Sylvia Allegretto, credit the successful #RedforEd protests that swept the nation in 2018 and 2019 for securing increases in teacher salaries.

“The movement led to some important changes,” Allegretto said. “Unfortunately, we’re going to need much more of this in the future and in the near future.” 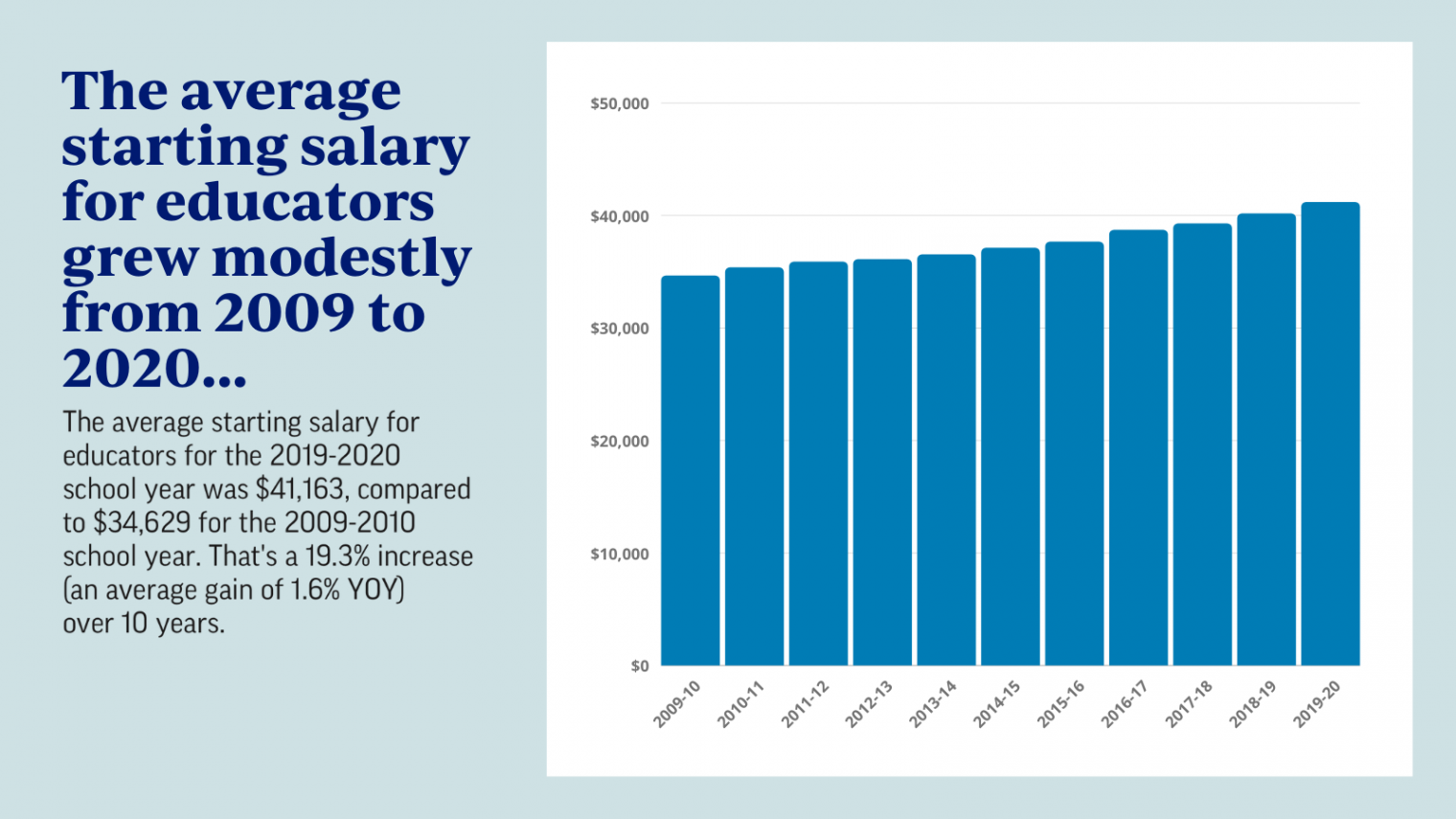 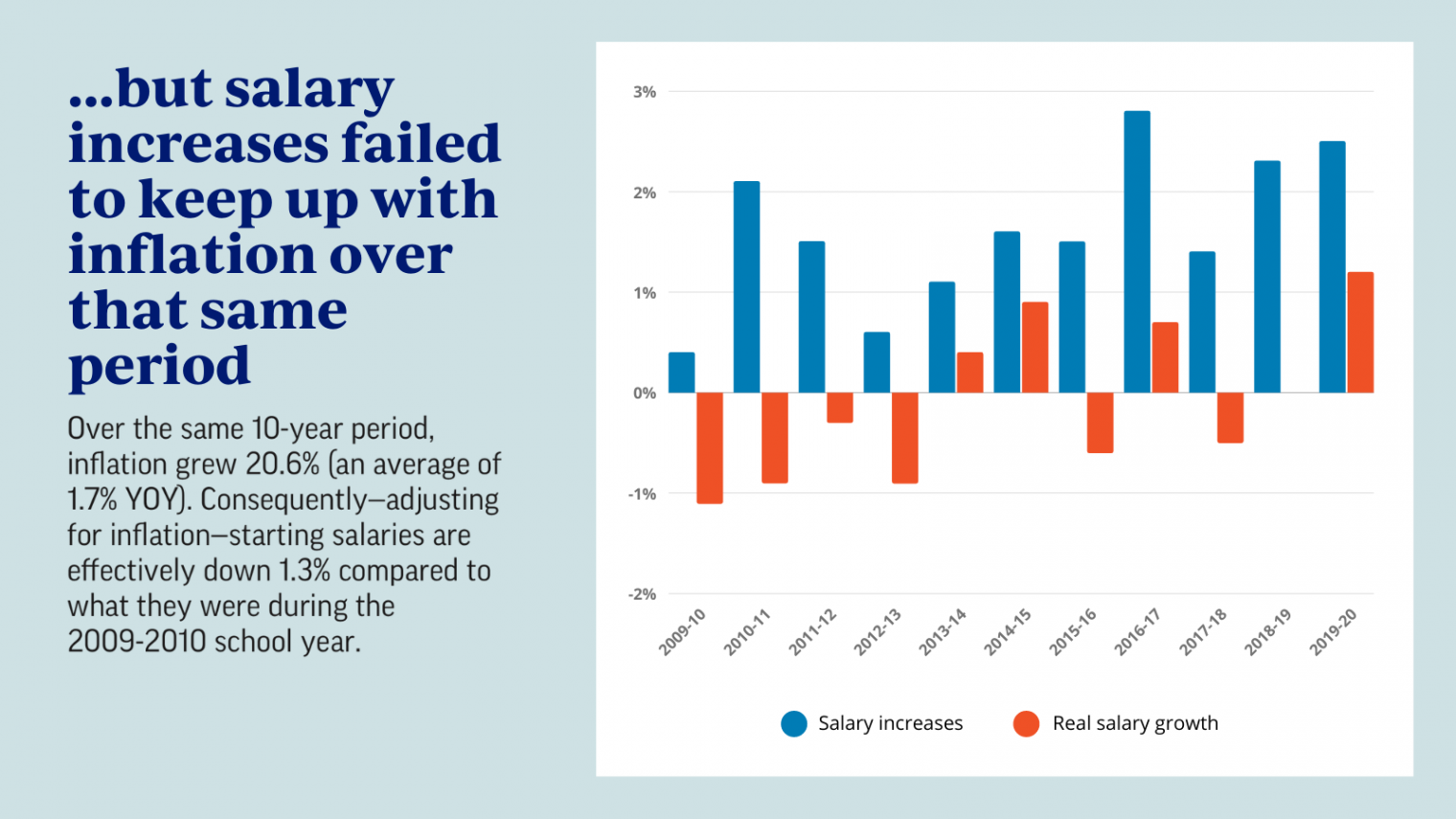 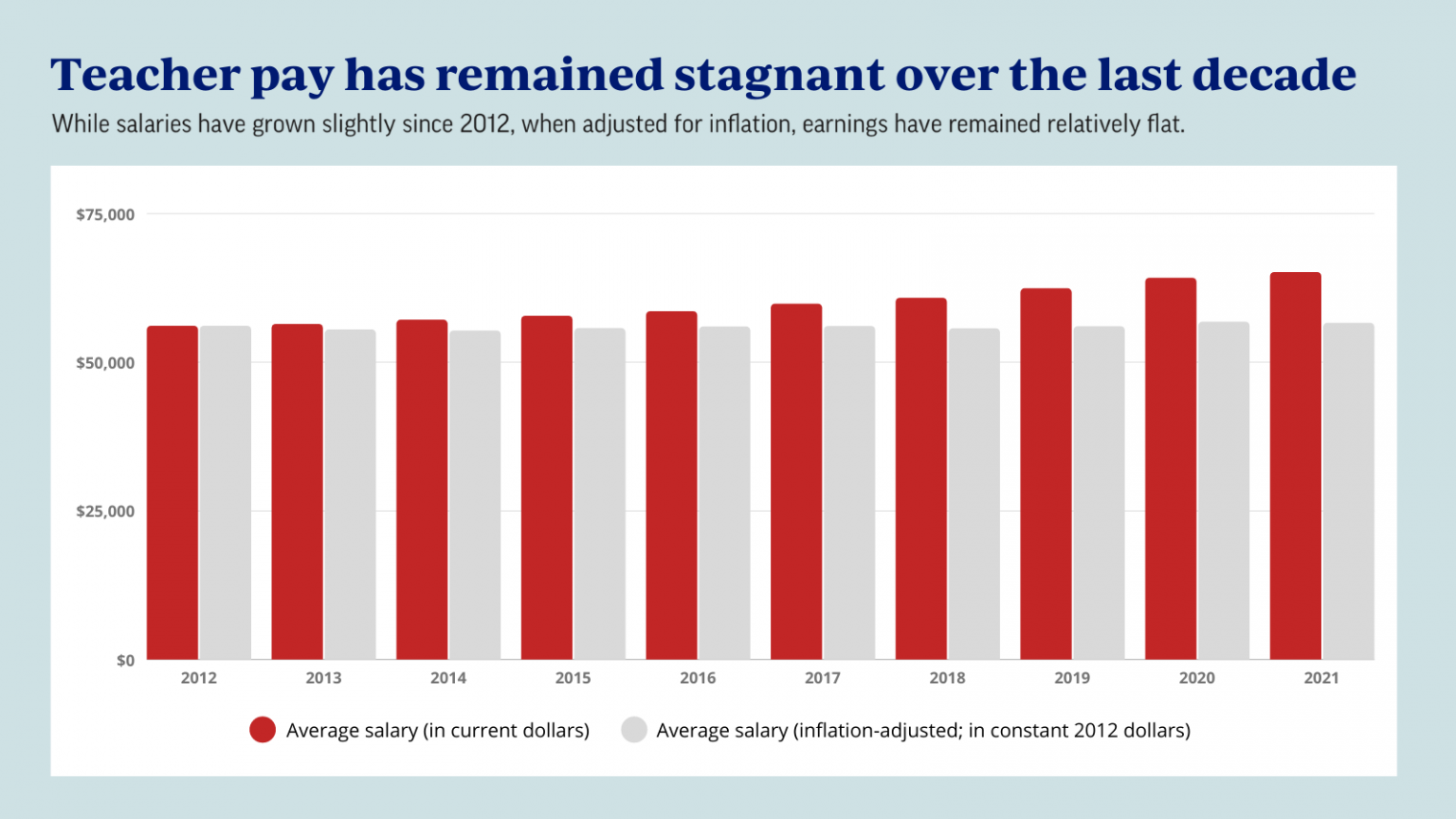 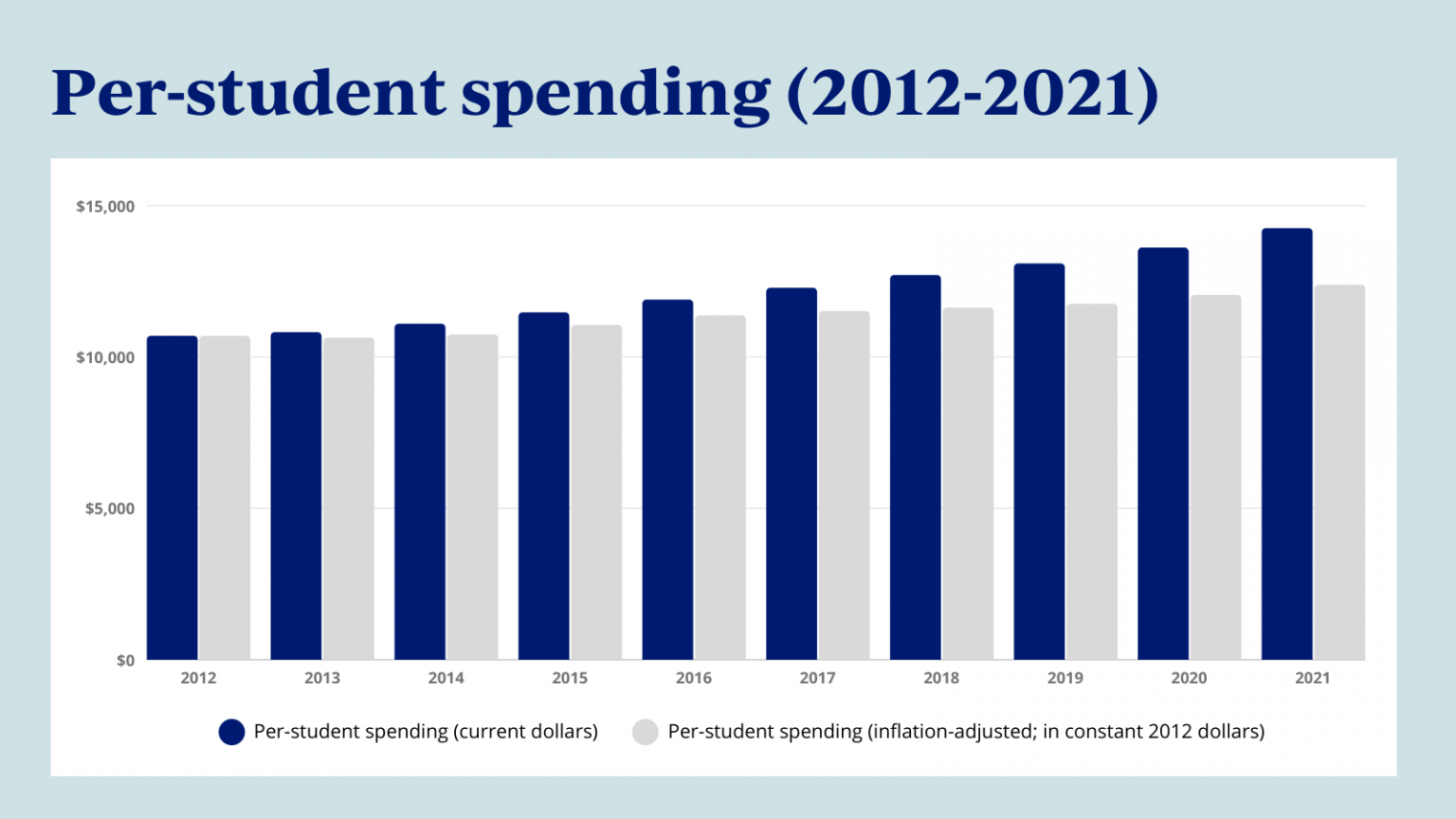 “We’ve made a lot of progress because of the #RedForEd walkout and all our advocacy we’ve done before and after. Our students deserve fully funded classrooms. Our teachers and support staff need to be able to afford to do the jobs they love. Now isn’t the time to rest.”

Collins and her colleagues recognize the full fiscal impact from the COVID-19 pandemic is still unknown. Furthermore, as schools are slowly reopening to in-person learning, how many educators—after the unprecedented stress of the past year—will choose to stay in a profession in which they are chronically underpaid?

“As the nation’s public schools struggle with a looming teacher shortage that has only been exacerbated by the COVID-19 pandemic, one of the best indicators of attracting and retaining teachers is looking at the starting and average salaries for the profession," says Pringle.

NEA has advocated for a base starting teacher salary of at least $40,000, a target that remains unmet in parts of the country that struggle to attract and retain quality teaching professionals—a problem that is especially acute in under-resourced communities serving Black, Brown and Indigenous students.

According to the Teacher Salary Benchmark Report, while 845 school districts hit this threshold in 2019-2020, more than 6,000 school districts that employ 800,000 teachers fell short in offering a starting salary of at least $40,000.

Overall, about 20 percent of teachers hold second jobs during a normal school year, accounting for roughly 9 percent of their annual income.

Ashlee Curtis, now in her third year as a high school teacher at El Dorado High School in El Dorado, Arkansas, has relied on her coaching position to supplement her income. Second, even third incomes, for educators are commonplace in El Dorado, a small town in the southern part of the state.

“Everybody in my hallway at school has at least one other job," said Curtis, who is also president of the El Dorado Education Association. "The turnover rate is very high. We have the lowest salaries in the state and haven’t had an increase in many years.”

That is until April 14, when Curtis and Carol Fleming, president of the Arkansas Education Association joined Governor Asa Hutchison to witness the signing of two bills into law that will lift the median salaries for teachers in the state from $49,822 to $51,822 for the 2021-2022 and 2022-2023 school years.

The median salary in Curtis’ district is only $46,000, so she and her colleagues will receive a larger spike in pay to meet the new median threshold.

The legislation sets aside $25 million for districts that are below the new median teacher salary.

“It’s just a starting point to getting educators where they need to be but it’s huge,” said Curtis. “This could be the difference that help educators focus exclusively on their classrooms instead of working additional jobs. We all do the most of our students but getting paid more will allow us to channel all our energy toward them.”

Curtis added this will help schools in the state get and keep great educators.

The new law couldn't have happened without educator advocacy. The Arkansas Education Association worked tirelessly with legislative leaders and the governor’s office to shape the new legislation. “AEA fought non-stop to get this bill passed,” says Curtis.

It’s this level of mobilization by educators and their allies that can help the nation chart a different course than the devastating austerity agenda that gutted school budgets across the country more than decade ago.

“What we don’t know is what will happen in the 2020-21 school year and beyond because the COVID-19 pandemic has completely changed public education,” said Pringle. “We are still in a funding hole that was dug decades ago.  The country cannot afford to take its foot off the pedal of progress.”