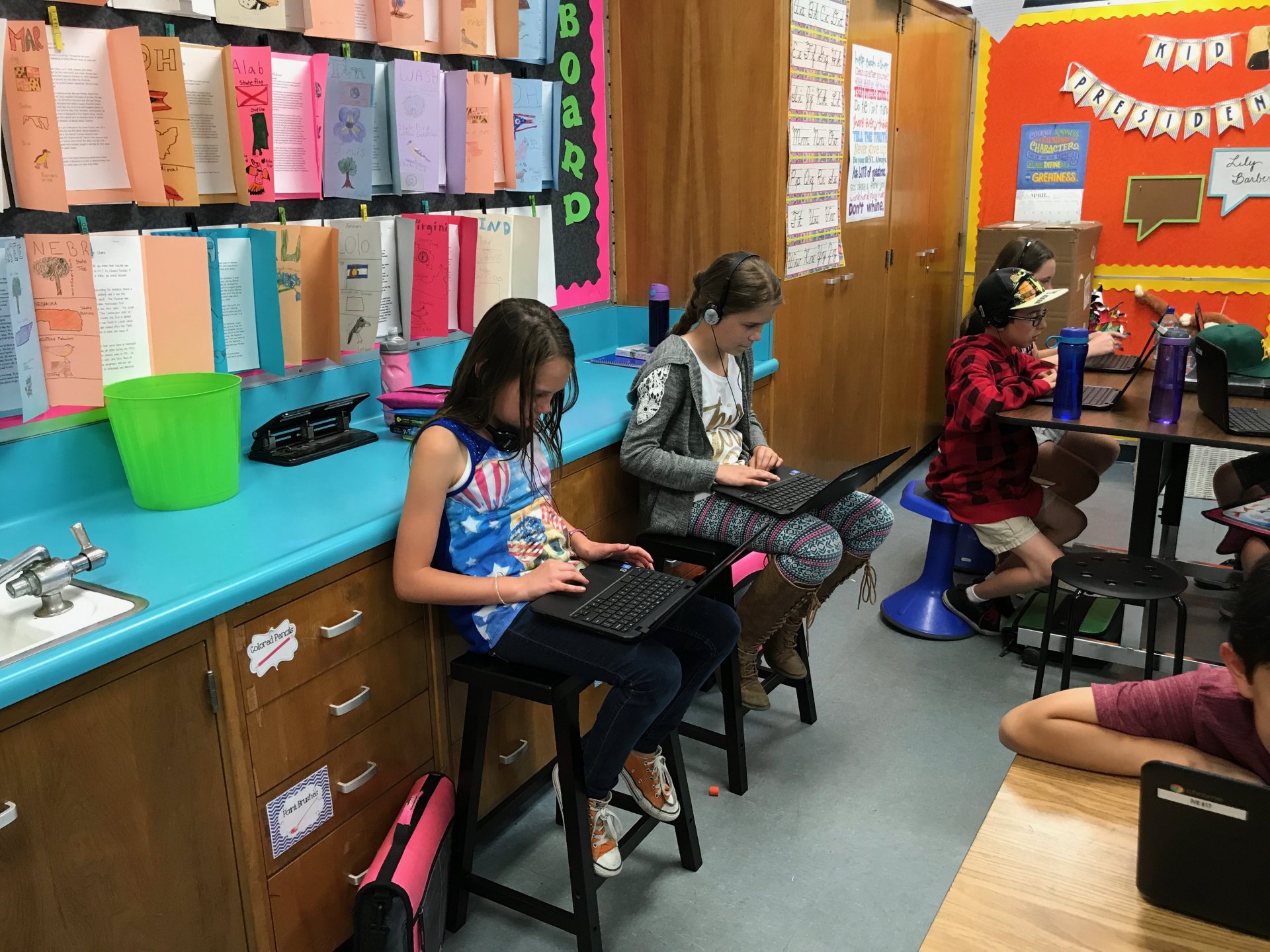 Teachers are adapting their classrooms for the Knowledge Era. For some, that means creating a homier environment, where students are comfortable learning. For others, it’s changing the core of what it means to be a teacher.

Here, educators talk about how they’ve modified their instruction and reshaped their spaces to meet 21st century student needs.

Brynn Hutchison, who teaches a fourth- and fifth-grade combination class at Banyan Elementary School in Newberry Park, began to reimagine the physical space of her classroom after spotting ideas on Pinterest.

“First, I started taking legs off of desks to move them closer to the floor,” says the Unified Association of Conejo Teachers (UACT) member. “We have 36 kids in fifth grade, and they are bigger, so classrooms can feel crowded. Lowering desks helped make the classroom feel huge.”

Then, she added yoga balls because some nudgier students worked better on them, and brought in wobble stools, bean bags and video rockers. Generous parents purchased a standing desk and an adjustable table for her own use.

“It’s the Starbucks Classroom,” Hutchison jokes. “The kids are more engaged. When we read a novel, we have a discussion that lends itself to be more relaxed. There’s more participation.”

Hutchison had input from students along the way.

“They articulated how they need to sit. Some said they needed a yoga ball to bounce, others wanted a seat with no back. They were surprisingly self-aware,” she says.

Three of Hutchison’s colleagues who team-teach the same students reimagined their classrooms as well, and report positive results.

Tetzlaff’s classroom furniture includes items from her garage and donations from parents and a DonorsChoose.org request.

Her biggest surprise? Some of the seating, like yoga balls, requires students to pay more attention than before, lest they fall off their perch. And Tetzlaff says she makes more eye contact with students, since they can’t hide behind others.

“The reimagined classroom is always evolving,” says Heather Toll, an eighth-grade teacher at Green Valley Middle School and member of the Fairfield-Suisun Unified Teachers Association (F‑SUTA). “It is more about the kids and less about me.”

She has always allowed students to move around, as she does herself when she is employing QR codes, Apple TV and a smartboard. “My kids have desks, but they can move their chairs around. Much of the time, they sit on the floor,” she says. Instead of prohibiting cellphones, Toll encourages students to use them in their assignments, along with Chromebooks. “Some kids can actually write essays on their phones. I see them pounding away on them,” she says.

Her students have also taken to Twitter, which allows them a bigger audience. They respond to one another in Twitter chats, and often draw comments from parents or even district staff.

“They’ve learned that what they say is being seen by other people. They see things are more global than they thought,” Toll says.

“Students need to have their own voice. I facilitate and guide them. Sometimes it’s hard, but it’s more collaborative. I find that kids will take leadership of the classroom.”

“Reimagining class is a makeover of your everyday classroom to allow students to be comfortable,” says Teresa Basin, fourth-grade teacher at Rail Ranch Elementary School in Murrieta. This year, Basin was inspired by a former student now acting in Bizaardvark, a sitcom on the Disney Channel. Basin turned her class into “Basinwood,” her own version of Hollywood.

“I want my students to know that if they can dream it, they can do it,” says the Murrieta Teachers Association member. Students each have their own star. A sign above the sink reads, “Each one of us has a little bit of gold inside of us.” There is also a “Walk of Fame” with photos of students and their families.

“I spend more time with my kids than their parents do,” Basin says. “School is a refuge for them. It’s our home away from home.”

For Toll’s colleague, seventh-grade teacher Dalal Mansour, technology is the way forward. “It lets me give students immediate feedback. Google Docs allows me to comment as they are writing. I’ve even been at a conference and still been able to leave comments on their work,” says Mansour, also an F‑SUTA member.

“I know which kids to target. I don’t have to call someone up to my desk — it’s more private.” Mansour says her students are more engaged in their assignments, and because the tools lend themselves to collaboration, they can work together on the same assignment at the same time. She acknowledges that technology must be used correctly. “We need technology that transforms instruction. If we are just using it as a replacement for paper and pencil, it becomes a very expensive pencil.”

IN 2015, North Dakota educator and blogger Kayla Delzer wrote of her epiphany at a local Starbucks, where happy customers relaxed and worked in a variety of seating and table options. She thought her students could benefit from the same thing. In the real world, Delzer observed, people are responsible for their own learning, and giving students choices that suited their learning styles made sense.

She redesigned her classroom with mostly recycled and repurposed items to offer flexible seating and open floor space. Students decide where to sit every day, depending on their work and where they work best. Delzer said that students’ distracting behaviors have lessened while engagement and participation increased.

In a recent Edutopia story, she detailed how she makes her classroom work: