Skip Navigation
We use cookies to offer you a better browsing experience, provide ads, analyze site traffic, and personalize content. If you continue to use this site, you consent to our use of cookies.
Magazine

In this issue, we are changing the conversation about educator "burnout." This isn't about the individual; it's systemic. And lawmakers must take action now to keep more educators from flocking to the exits. We also explore why it's important to pronounce student names correctly, offer tips for helping students who are grieving, and take you to a New Mexico art build that helped educators win historic raises! 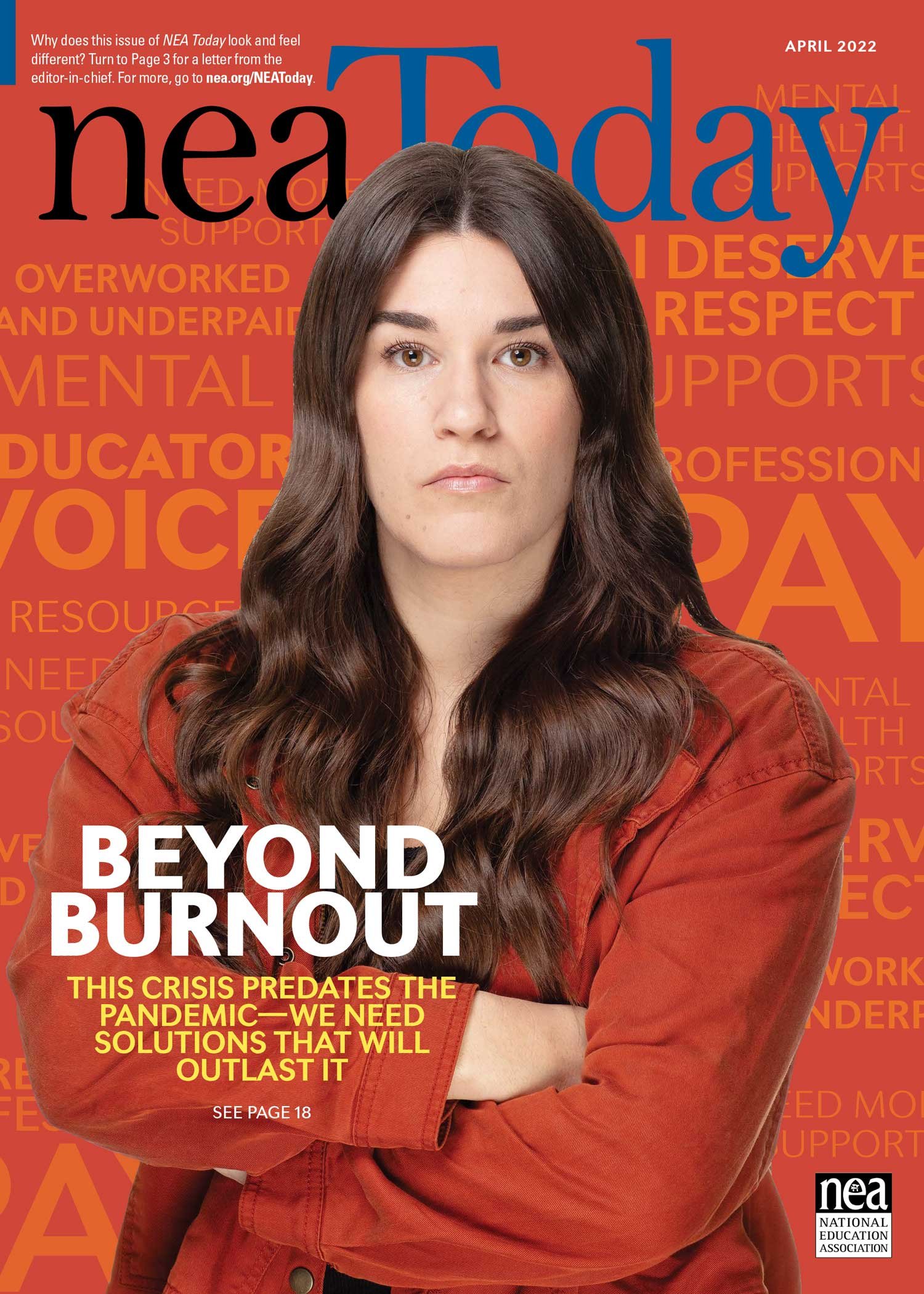 COVER: Beyond Burnout
Educators have been underpaid, undervalued, and underresourced for years. Now, many have reached their limits and are looking toward the exits. They know what changes need to be made to prevent a major exodus from the profession.

What’s in a Name?
Pronouncing students’ names correctly shows respect for their identity and heritage. Check out these tips for getting names right.

Artivism
New Mexico educators, students, and community partners paint beautiful, pro-public education signs, and then display their creations in a rally at the state Capitol.

When Students Grieve
An estimated 175,000 children in the U.S. have lost parents and grandparents to the pandemic. Learn what to say and how you can help when students are mourning.

ESP: Counseling in Crisis
“I’ve been doing this for 23 years, and it’s never been like this,” says Delaware school social worker Gloria Ho. For her and many of her peers across the country, the pandemic has brought a tidal wave of student needs.

Teaching About the Armenian Genocide

On April 24, 1915, in the midst of World War I, the Turkish rulers of the Ottoman Empire arrested and later executed several hundred Armenian political, cultural, and religious leaders in Constantinople (now Istanbul). What followed this tragic event was a years-long genocide perpetrated against the region’s Christian Armenian population.

Taline Arsenian, a math teacher in Glendale, Calif., whose grandparents fled the Armenian Genocide, believes that teaching students about this atrocity—and the efforts to deny its occurrence—will help students become more committed advocates for justice.

During this campaign of terror, the Otto-man authorities killed an estimated 1.5 million defenseless Armenian men, women, and chil-dren in a series of state-sponsored massacres. Millions more Armenians were forced out of their homes, deported to other countries, and placed in concentration camps in the desert.

Concerned U.S. officials and diplomats intervened, however, making the world aware of these atrocities and mobilizing support for the hundreds of thousands of Armenians forced from their homes.

Additionally, the Near East Foundation, the nation’s oldest congressionally-mandated non-governmental organization, served as a philanthropic hub for U.S. humanitarian assistance, helping to raise more than $117 million between 1915 and 1930 for Armenians displaced by the genocide. This outpouring of generosity from Americans of all backgrounds helped establish refugee centers, clinics, and more than 400 orphanages that rescued over 132,000 Armenian children of the genocide.

Educators must shine a light on these horrors to help build a better world for our children—a society that stands firmly against the violent oppression of any group and works to mobilize the best of humanity for those in need of assistance.

Says Arsenian: “Our public schools must help to educate the new generation to look critically at the ongoing present-day effects of genocide denial.”

A survey by Learning Heroes, a non-profit education organization, asked parents and guardians what their top worries were for their children in school. As expected, most respondents cited contracting COVID-19 and overall fear and anxiety. The top concern? Sixty-eight percent of parents say they are worried about “politicians who are not educators making decisions about what students learn in the classroom.” The survey also asked parents about their top priorities for the school year. The safety and security of students and staff topped the list, followed by students’ academic progress in reading, writing, and math, and addressing students’ mental health and emotional well-being.

According to recent research from Boston University, student bullying decreased during the pandemic—not only in schools, but online as well.

They found that bullying and cyber-bullying searches dropped by 30 to 40 percent in the first few months following school closures.

Even in schools that returned to in-person learning in fall 2020, bullying had not fully reverted to pre-pandemic levels.

In an online interview with the Harvard Graduate School of Education, study co-author Andrew Bacher-Hicks said, “Bullying tends to happen during unstructured time. When students are passing in the hallways, at recess, during lunchtime. With COVID precautions, in-person schools had less unstructured time, meaning there may have been fewer opportunities for in-person bullying to occur.”

How the Union Changed My Life

Joining the union set these educators on unexpected paths

Many young educators join the union for the liability insurance but soon find themselves on the road to self-discovery. They tap into confidence they never knew they had; make friends who inspire and support them; and learn how to raise their voices to make an impact on students in their communities and across the nation.

With the benefit of hindsight, these inspiring NEA-Retired educators share their stories of personal and professional transformation—and how they are still driving change today.

Power in the district, standing in the community

It was 1983, and I was excited—and nervous!—to be interviewing for an office position with a school administrator. I needed a better job, but the interview did not go well.

“Gal, you can’t work here,” he said. “I can’t hire you in the office. But there’s a custodian position you can have.”

I felt strongly it was a racial issue—
discrimination was a known problem in our school district. But I didn’t give up.

I took the custodian position and got involved with the Clay Educational Staff Professionals union. My colleagues there taught me about my rights and opportunities. I also began to see how essential it is to build strong relationships and have the right people in key positions.

I worked for a superintendent candidate who was a member of the local and had progressive ideas about race and gender. After she won with the union’s support, she helped me get a new position—in the department where I had first applied.

That was just one of the many times the union opened doors for me. Since then, I’ve had success in support positions in district schools and have held top leadership positions in the union locally and statewide.

In 2007, the campaign skills I developed through the union helped me become the first Black woman to serve on the Green Cove Springs Town Council.

The confidence I gained, the connections I made in the community, and the support I received from the union made all of that possible.

A sense of unity

For me, one word comes to mind when I think about my years in the union: unity.

I felt it during a strike by the Great Falls Education Association. It was one of the longest local strikes in the nation during the late 1980s, with 820 teachers walking out for nearly a month. It was very hard on members.

As an executive committee member at the time, I worked with a local credit union to secure $1,000 loans for union members who were on strike. I was an auto mechanics teacher, so I fixed cars in driveways to make ends meet. Members helped each other in
a host of ways, too, even financially.

I remember that I disagreed with another leader in the union on nearly every political issue, but I vividly remember protesting alongside her when unauthorized workers from other states filled our jobs. That unity grew from the idea that we guided 11,000 kids from childhood to adulthood successfully.

I also saw that sense of unity when I became a field consultant for local unions in 1995. I worked with a young man who was struggling as a teacher. Several of us in the union encouraged him to keep trying and offered support.

Years later, the teacher had received better training and help, and he was succeeding. He became a happier, better teacher, and our schools gained a valuable asset. Working together paid off in the best way.

I hope others like me find the value of the union and understand how the word itself conveys what really counts: unity in our profession and unity in
our union.

Becky's Journal of Joy, Justice, and Excellence
NEA's president spent her fall visiting schools and NEA members and speaking out on the issues that matter to public education.

Are you retiring this year and want to continue the benefits of NEA membership? Join more than 320,000 retired educators who continue to support students and public education. For a one-time fee of $300 (plus applicable state dues), you can lock in your NEA dues for life and secure existing and new benefits that will help make your retirement rewarding.