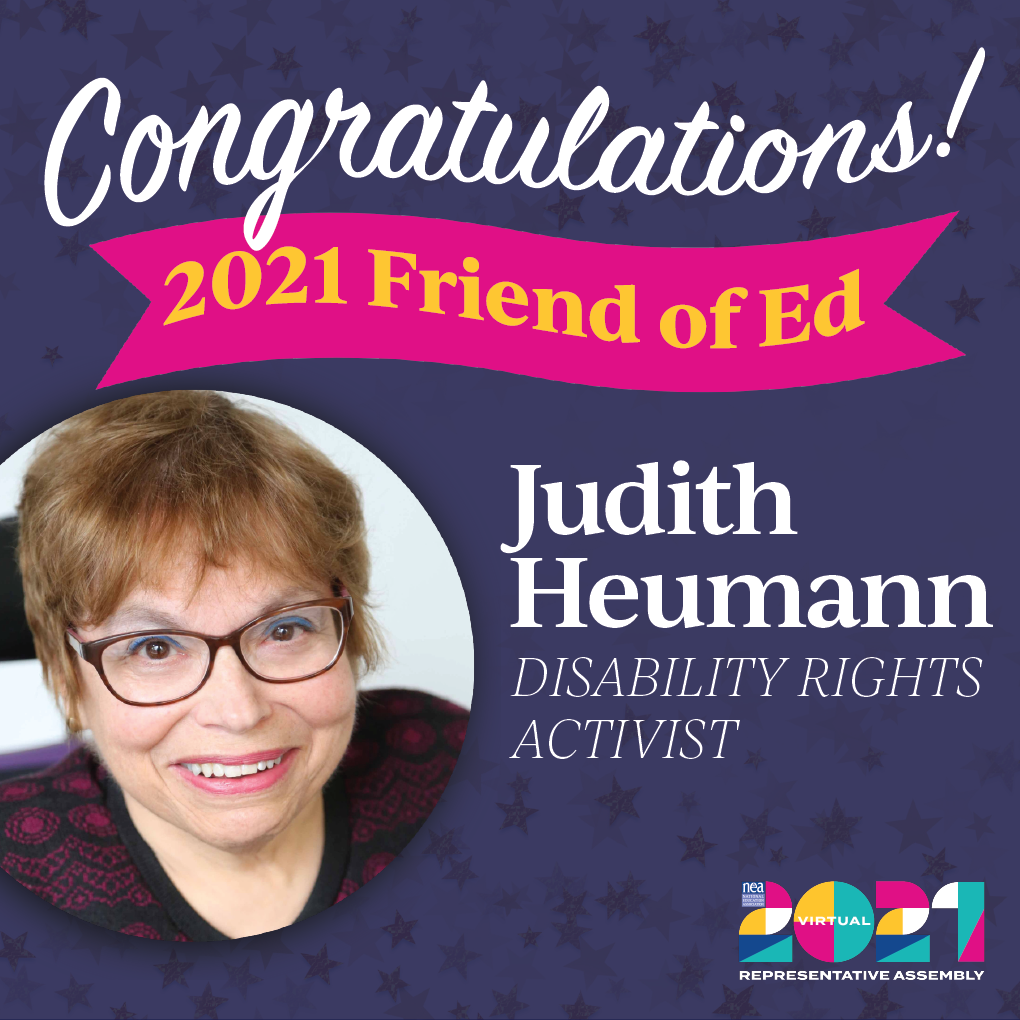 The National Education Association awarded lifelong disability rights activist Heumann with its highest honor — the Friend of Education Award — during its virtual Representative Assembly in Washington on July 2, 2021.
By: Staci Maiers
Share

WASHINGTON — Imagine your mom is taking you to the neighborhood public school to enroll. Your belly is full of butterflies because of all the excitement for that first day. But as you enter the school campus, the principal breaks the news that you can’t attend there after all because you’re a “fire hazard.” The shocking scenario seems unimaginable now, but that was the reality facing a young, wheelchair-bound Judith Heumann in 1950s Brooklyn.

“It was very clear as I was growing up that there was not an expectation that I or the millions of other disabled people who lived in the United States were expected to…contribute to society,” said Heumann. “Even being that young…[we] realize[d] that the status quo is not what it needed to be.”

The heart-breaking scene at that New York public school helped lay the foundation for Heumann and her life’s work to ensure that all students — white, Black, Brown, Indigenous, disabled or not — have access to a just and equitable education, no matter their different learning needs or abilities. “Those of us who come from other minority groups really understand both the pivotal role that education does — or does not — play in our ability to move forward,” she added.

Always looking for the teachable moment, NEA President Becky Pringle remarked how Heumann had taught her by describing their appearances and surroundings, in detail, for the visually impaired viewers as they began their virtual conversation.

“Judy Heumann has a unique perspective of being a former teacher and having worked for the Department of Education. She understands how those roles together can positively impact education policy,” said Pringle, who presented Heumann with the award. “Just like other marginalized communities, institutional discrimination has systematically harmed the disabled community. We must tear down those barriers that stop us from progressing, and those obstacles are coming down thanks to civil rights leaders like Judy who have been brave, fierce and unapologetic in advocating for change.”

The NEA Friend of Education Award is presented during NEA’s annual convention and recognizes a person or organization whose leadership, acts or support have significantly contributed to the improvement of American public education. Past recipients include economist Paul Krugman; education policy writer and researcher Linda Darling-Hammond; leaders of the Public Broadcasting Service and the Corporation for Public Broadcasting, among many elected officials and other dignitaries.

“If you don’t demand what you believe in for yourself, you’re not going to get it,” has said Heumann. We agree.

More resources are available at www.nea.org/ra
Follow on twitter at @NEAmedia and @BeckyPringle
Keep up with the conversation on social media at #NEARA21