2019 ESP of the Year Matthew Powell Does It All 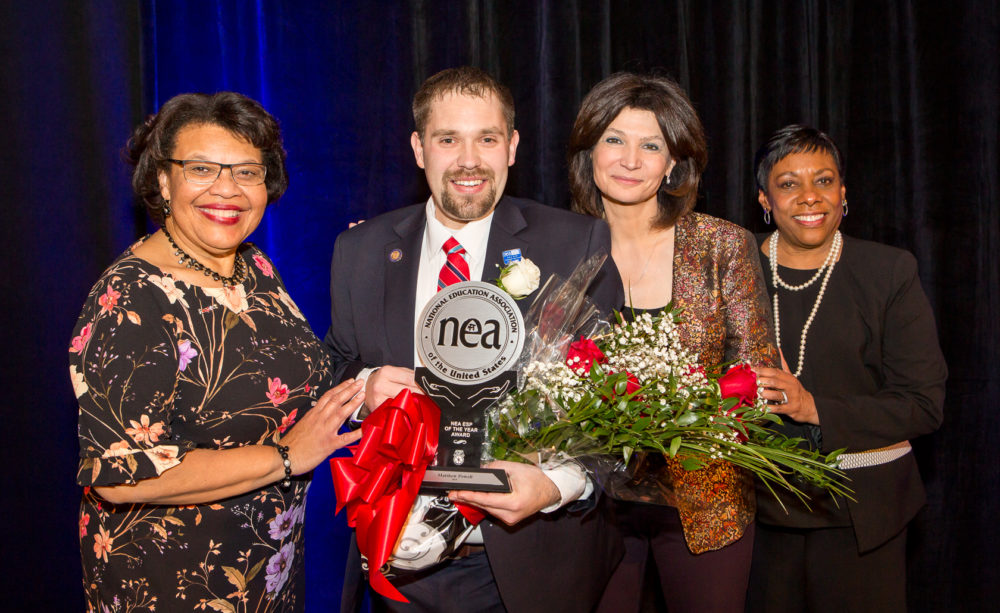 When he is not leading the custodial team at Graves County Central Elementary School in Mayfield, Ky., Matthew Powell can be found serving as the safety officer for the crisis management team of Grave County Schools. When the need arises, he also fills in as a special events bus driver.

Even more, in 2016, Powell established residency on school grounds as a nighttime security guard to boost student safety, and for legal reasons. By claiming residence in a small housing unit located near the Graves County middle and high schools, Powell has been able to keep the city of Mayfield from annexing school property. According to Powell, the annexation would result in revenue loss for schools and a payroll tax hike for education support professionals (ESP), teachers, and other school employees. Standing his ground, Powell filed a lawsuit against Mayfield which is pending with the Kentucky Supreme Court.

For his undying dedication and hard work on behalf of students, colleagues, and his community, Powell was named the 2019 National Education Association (NEA) ESP of the Year during the ESP of the Year Award Dinner at the NEA ESP National Conference in Las Vegas, Nev. The annual award is NEA’s highest honor for ESP members.

"Matthew thinks in terms of possibilities rather than impossibilities, solutions rather than problems, do’s rather than don’ts," said NEA President Lily Eskelsen García. "Most of all, he believes that students should be at the center of every decision we make in our schools.”

Powell received a standing ovation from the more than 900 ESPs, teachers, school administrators, and other educators from across the country who participated in the 28th annual conference.

“I will always fight for all of our students and ESPs, and public education together, said Powell. "Coming from Kentucky I know what it’s like to fight, especially when you have a senator who won’t listen. And I will continue that fight along with elevating ESPs."

“He not only cleans school facilities and looks out for students, but he catches potential members wherever he can and convinces them to join KEA,” said Stephanie Winkler, president of the Kentucky Education Association (KEA), in her nomination letter to the ESP of the Year Selection Committee. “He is one of the most kind, tenacious, and hard-working individuals I have ever met.”

Approximately 2.8 million school support professionals work in the nation’s public school systems, with more than 75 percent living and voting in the school communities in which they work.

2019 ESP of the Year Matthew Powell

The conference theme, Education Support Professionals: Uniting Our Members and the Nation for Strong Communities, Empowered Educators, and Successful Students, set the tone for the 47 workshops, discussion sessions, and keynote speeches.

“Everyone knows that teaching is important, but even the greatest teachers need support from the professionals who transport students to school, keep the building safe and clean, prepare nutritious meals, offer support in the classroom and manage the front office,” Powell said to the West Kentucky Star.

Powell is a member of the Graves County Education Support Professionals and NEA board of directors. A graduate of Graves County High School, Powell has worked in the school district since August 2007 and has worked at the elementary, middle, and high school levels. He is a graduate of the KEA Fellows program and NEA Leaders for Tomorrow, Class of 2016.

While working for Graves County Schools, he earned a bachelor’s degree in educational studies from Western Governors University in 2012. Powell also served as a district softball coach and team bus driver from 2011-2014.

“I am a strong advocate for meeting the needs of the whole student,” Powell told the Star. “This approach can only succeed when parents, teachers, administrators and support staff all work together.”

“ESPs are the backbone of our schools,” Powell has stated. “We do make a difference and deserve to tell our stories.”

At the conference, ESPs attended workshops which allowed them to earn credits to further their professional goals in the NEA ESP Professional Growth Continuum (PGC) and NEA Leadership Competency Framework (LCF).

Participants could easily identify the workshops that aligned to one or more of the PGC's eight universal standards: communication, cultural competence, organization, reporting, ethics, health and safety, technology and professionalism. Workshops were labeled with the PGC universal standard(s) with which they aligned. Newcomers to the PGC were encouraged to complete a PGC self-assessment prior to coming to the conference in order to identify their individual growth needs and workshop selections.

Similarly, workshops indicated in the conference program their alignment with the six LCF domains – advocacy, communication, strategy and fiscal health, governance and leadership, leading our professions, and organizing. These competencies are designed to prepare NEA members as community leaders particularly with regard to education associations.

As an NEA board member, Powell helped to develop the PGC. He has stated that he was inspired to help establish the program so he could “advocate for ESPs so they can be champions like the support staff who championed for me.”