Chelsea Foo is a Science Teacher from Edmond, Oklahoma and the Chair of the NEA Peace and Justice Caucus 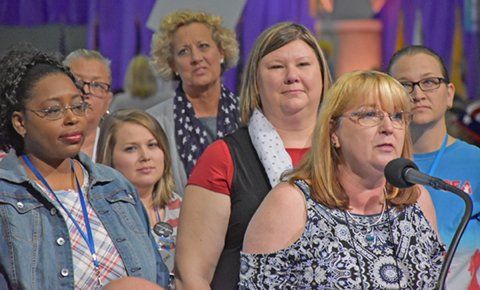 I got into teaching as a second career in 1994, and have taught mostly pre-AP biology, chemistry, and physics. Early on, I was a member of NEA and the Oklahoma Education Association, but not active nor particularly involved.

I became increasingly engaged after I took that first step to represent the teachers in my school.

While my involvement in NEA has given me a voice about critical issues that are so important today, my work with my local has allowed me to bring incrementally change at home.

Our group of leaders worked to remove all district-implemented testing of students. We collaborated with the school board to remove testing that used up valuable time and funding with no valid payoff at every level. We encouraged our district to hire more educators of color, which has resulted in an increasingly diverse staff, and we have worked to raise awareness district-wide about LGBTQ issues. We have fought for better working conditions, increased pay, and negotiated payment for mentors of new teachers.

With a grant from NEA we created a team to change policies that affected our early career educators and were able to change district policy regarding professional development and discipline.

We created an Edmond Early Educators group that works to engage early career educators and have worked with the local university’s school of education to put on social and racial justice panels and classroom management sessions using our members.

While being able to teach is a gift for me, it has been particularly rewarding for me also to have an opportunity to be at the center of a group like the NEA Peace and Justice Caucus to make a difference on such important issues through an organization that plays such a key role in the fabric of our country.

I’ve really valued the work we are doing in our district and in the future look forward to tackling the important issues on our agenda.