Teaching with an Anti-Racist Lens

Educators are committed to helping students build a better future for everyone. 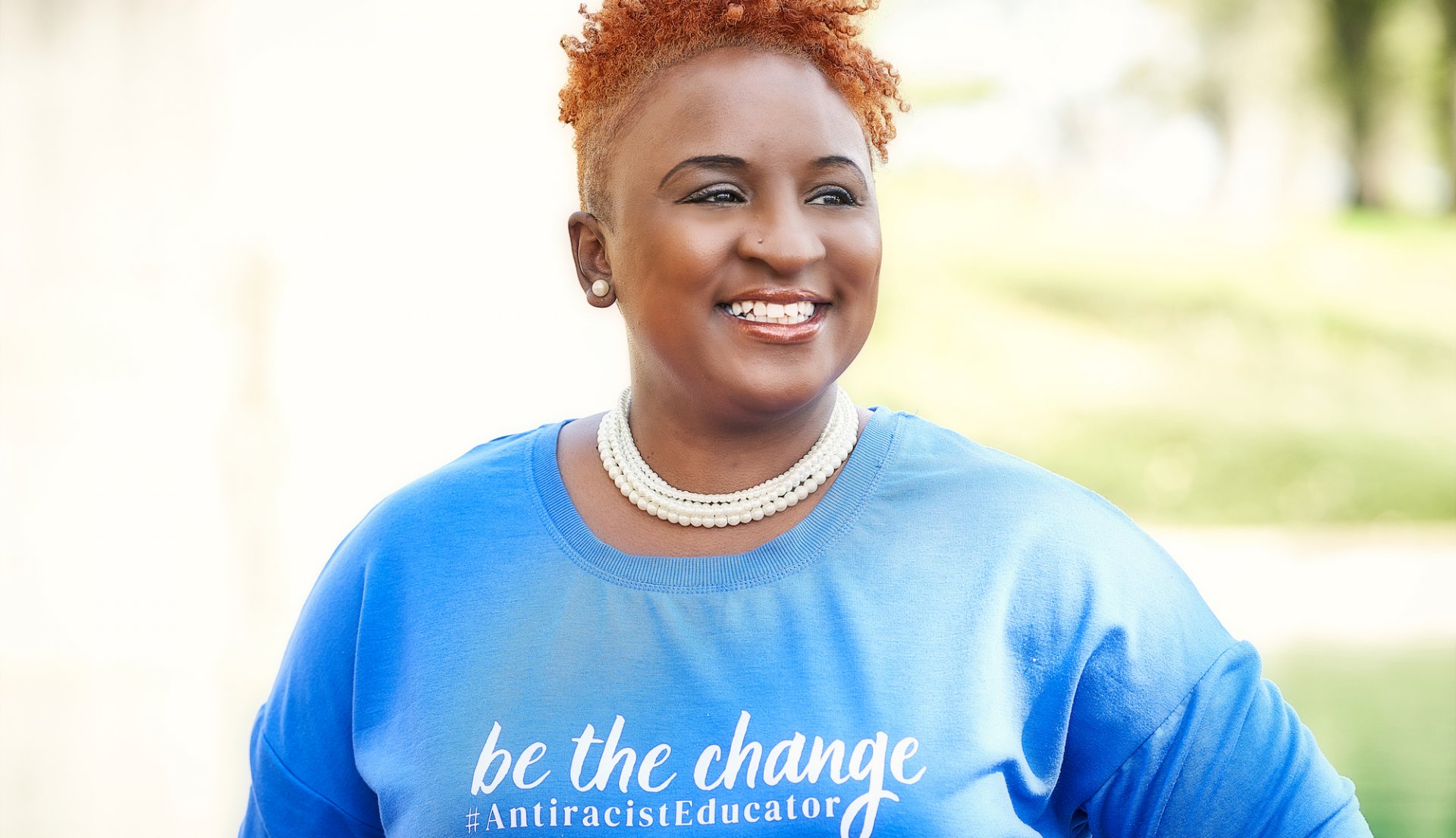 Franchesca Mejia had always wanted to be a performer. She went to college to study music and even got a taste of life as a musician during her senior year. She played bass (and sometimes violin) at churches, performed pop music at a pizza shop, and played in orchestras in her hometown of Austin, Texas, and the surrounding area.

“It was nice: The money ... the let-me-play- for-patrons-and-sip-scotch-afterwards lifestyle,” she says. But it wasn’t long before she felt pulled in a different direction. “I want to help change the world and make it a better place,” she says.

Mejia added an education degree to her repertoire, including a master’s degree focused on social and racial justice in the music room. She went on to teach orchestra for the Pflugerville Independent School District, where she took a no-holds-barred approach to teaching through an anti-racist lens. Today, she teaches orchestra for the Hutto Independent School District, outside of Austin.

“The music room is one of the best vehicles for teaching racial and social justice,” says Mejia, who has been an educator for nine years. “We’re able to find real connections with people all over the world without words.”

The Meaning of Anti-Racist Teaching

“Practically speaking, teaching through an anti-racist lens simply means helping students understand racism’s origins and guises, past and present, so they can act to disrupt, rather than perpetuate, White supremacy,” says Ursula Wolfe-Rocca, a former high school social studies teacher in Portland, Ore.

Wolfe-Rocca works with the Zinn Education Project—a non-profit co-coordinated by Rethinking Schools and Teaching for Change that promotes and supports teaching history accurately.

For Mejia, anti-racist teaching starts with being honest and transparent with her students.

“It’s the best part of teaching,” she says. “I get to know my students and their truths ... . We then learn we all have the same struggles despite our backgrounds.”

Mejia adds, “I do more good work in creating a mindful student who looks at the world through equity, justice, and love, than if I censor myself.”

And therein lies the rub.

“A lie is always more of a threat than the truth, even when the truth is painful,” says Kevin Welner, a professor of education at the University of Colorado Boulder and director of the university’s National Education Policy Center. “Our children need to understand the painful truth of racism.”

Yet, for nearly a year, certain parent groups and lawmakers nationwide have been pushing legislation to prevent educators in public schools from teaching about systemic racism and sexism. Instead, these people are advocating for outdated and inaccurate lessons—and lies—to maintain comfort over truth.

Proponents of these bad bills, who like to use the phrase “critical race theory” to describe anti-racist teaching, are trying to dictate what teachers say and block kids from learning about our shared history.

Terry López Burlingame, a 20-year Spanish teacher in a rural K–8 school in Gilmanton, N.H., worries about these bans. Earlier this year, certain lawmakers in her state picked up the mantle, stoking fear about public education and banning educators from teaching about race.

“I’ve talked to my kids about how Christopher Columbus was not a nice guy. We’ve talked about Frederick Douglass, which means talking about slavery, and about Native People and their contributions,” she says. “I could have a parent dislike this, and [then I could] be investigated and penalized.”

She adds, “This comes down to censorship. ... We will continue to teach the truth [and] not ignore the past and present experiences of our students.”

Brandon Morrison, a fifth-grade teacher in Guilford County, North Carolina, agrees. He wants his students to dig deeper into what they see in the world, including what’s taught in the classroom. He’s seen his share of curriculum that depicts the life of enslaved people as a “wonderful time on the plantation” or discusses how Africans “migrated” to the U.S.

“This was enslavement. When seeing those things, it’s important to speak truth as much as possible,” he explains. “I give my students real-talk sessions ... . Many of them, as fifth graders, already have the knowledge and understanding of social justice and how society works. I don’t think we give them enough credit.”

Morrison doesn’t shy away from big concepts, either. He talks to his students—in terms they can understand—about capitalism, racism, stolen land from Indigenous people, the driving forces behind societal systems, and more. His goal is to give his students information they can process, explore, and use to develop their own opinions and beliefs.

“Education can open minds, but it is also a pathway for students to think beyond what I’m teaching,” Morrison shares. “And I challenge people who say we don’t need to teach this. I challenge them to first assess why they think that way ... . If my fifth graders can look at our nation’s systems of oppression and say, that’s stupid, an adult can do the same.”

What Anti-Racist Teaching Means to Educators

For Franchesca Mejia, this means her students listen to musicians from around the world, exploring African spirituals, the Chinese Cultural Revolution, and the Syrian refugee crisis, among other topics.

Among other pieces, she pulls from the works of Dmitri Shostakovich—a 20th century Soviet composer and pianist who played during Joseph Stalin’s reign of terror.

“With Shostakovich, we talk about what it means to live in fear and how that fear is felt in the music,” she says. “Kids will say, ‘Wow, that’s terrifying.’ And I tell them, now imagine some of your Black friends living in fear.

“I’m utilizing music to really connect to emotion ... to build an anti-racist curriculum.”

Last year, some of Mejia’s students watched a concert lecture by the Austin Symphony Orchestra, where they discussed the well-known antisemitic, racist, and homophobic beliefs of 19th century German composer Richard Wagner. And when Sir Edward Elgar’s Pomp and Circumstance, March No. 1 in D Major played, they discussed nationalism, patriotism, extremism, and racism.

“I go pretty hard and heavy when I can, because the world is shocking,” Mejia says. “I want them to understand that racism and its nuances go beyond the United States. It is a vast monster.”

How to Partner with NEA

“The first step in being an ally is to be aware of yourself,” says Amanda Thompson-Rice. A secondary school math specialist in North Carolina’s Charlotte-Mecklenburg Schools, she helps peers lead their classes with sensitivity to race, bias, power, and equity.

She often helps colleagues learn how to recognize and check their biases and be more aware of their beliefs.

“Your mindset and ... behavior can either build up or tear down a child,” Thompson- Rice explains.

“I give my students real-talk sessions ... . Many of them, as fifth graders, already have the knowledge and understanding of social justice and how society works. I don’t think we give them enough credit.”

She has taken part in NEA trainings on anti-racist teaching, including the Minority and Women’s Leadership trainings, Leaders for Just Schools, and the National Leadership Summit. Of particular importance to her was the Leaders of Color Pathway Project, a program that identifies and supports members of color in association leadership opportunities.

"This program changed my life,” Thompson-Rice says. “As a Black woman, we are sometimes perceived as angry when we speak truth to power or advocate for ourselves. This program taught me there’s space for me everywhere, I was validated, and I know I’m valued.”

She cautions that you cannot do one professional development workshop and call it a day. “This work is a journey, not a destination,” she says.

Over the last few years, she has become a more vocal advocate of social and racial justice, pushing for more equity in her district and encouraging her peers to get out of their comfort zones.

The Truth About Critical Race Theory

NEA is setting the record straight over the national conversation about critical race theory (CRT)—what it is, and what it isn’t.

CRT is based on an understanding that wo we are, the laws we have in place, the histories that have been handed down to us, have all been shaped by race. It’s taught in law schools and graduate schools. As for public schools, students deserve age-appropriate and accurate history lessons.

“We can objectively present to students the good, bad, and ugly of our past so that they can build a better, brighter future,” wrote NEA President Becky Pringle in a USA Today op-ed. “Our students need to learn about the times when this country has lived up to its promise, and when it has not. Honesty. That’s what they need from us. Truth. That’s what they expect.”

Anything other than this is a dog-whistle strategy that certain lawmakers use to distract and divide.

NEA offers these enriching trainings to help educators lead with an anti-racist framework:

Sign up to become an activist for racial and social just at NEA EdJustice.