Skip Navigation
We use cookies to offer you a better browsing experience, provide ads, analyze site traffic, and personalize content. If you continue to use this site, you consent to our use of cookies.
Letter

Assault weapons are intended for battlefields and war zones, not for our cities and towns. We must take them off America’s streets.
Share

On behalf of the 3 million members of the National Education Association, who educate, support, and nurture 50 million students in 14,000 communities across America, we urge you to vote YES on the Assault Weapons Ban (H.R. 1808). Votes on this legislation may be included in the NEA Report Card for the 117th Congress.

Americans are angry, saddened, and frustrated by the gun violence that holds many of us hostage to fear. Mass shootings occur somewhere in our nation every week. In Highland Park, IL, a murderer killed seven people and injured dozens more as they were enjoying a quintessential American tradition: watching a Fourth of July parade. That horrific event came weeks after the May 24 massacre at Robb Elementary School in Uvalde, TX that killed 19 children and two teachers.

Assault weapons were the weapon of choice in these shootings and far too many others across our country. They have only one purpose: to kill as many individuals as possible, as quickly as possible. They are intended for battlefields and war zones, not for our cities and towns. This slaughter is taking a tremendous toll on America, especially on our children, and it must end. We must end it.

The Assault Weapons Ban would:

From 1994 through 2004, when the federal ban on assault weapons was in place in our nation, deaths from mass shootings fell. Since it expired, such deaths have risen steeply, according to research published in The Journal of Trauma and Acute Care Surgery, further proof that assault weapons have no place on the streets of a civilized society.

Enacting the Assault Weapons Ban is an important step in addressing the root of our national problem: There are too many guns and military-style weapons on America’s streets, and they are a plague in rural, urban, and suburban communities of all descriptions. Until we come to grips with this issue, America’s cycle of gun violence, senseless massacres, and bottomless grief will continue.

Families should be able to go about their daily lives without worrying that a trip to a restaurant or a shopping mall or park or concert venue could be their last outing together. Children should come to school eager to learn and explore new ideas, not preparing to practice where to hide and how to react in a mass shooting. Educators should be free to focus on nurturing students and preparing them for limitless futures, not contemplating whether they will have to lay down their lives to protect students from a mass murderer.

We know what gives us a sense of security: living in communities where we feel safe and can provide for our families, receive the care we need, and trust that our children will be safe where they go to school and play. We will only realize that vision if we have the courage to take assault weapons off our streets. We urge you to vote YES on the Assaults Weapons Ban. 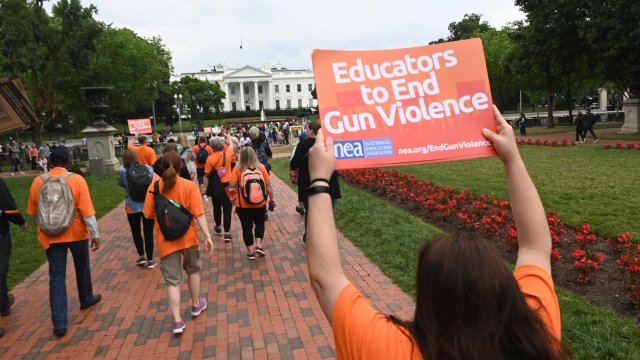 Banning assault weapons will help our students and loved ones feel more secure to go about their daily lives and pursue their dreams.