Starting as a small project to help feed the students in Mrs. Parker’s class in 2015, the Bull City Foodraiser today serves over 5,000 students in Durham Public Schools who receive free or reduced-price lunch. 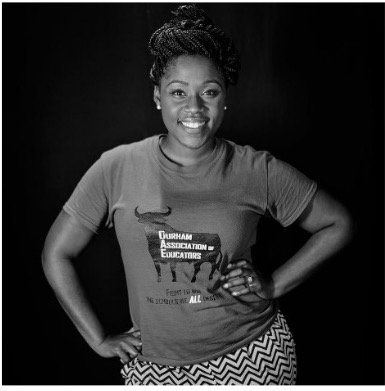 $103,079.70 is not a total a cashier sees every day. However, that’s exactly how much Turquoise LeJeune Parker spent in December 2021 at Costco, and every cent was spent on food to give to Durham Public Schools students for their winter holiday.

Food insecurity is a pervasive issue for children and families living in poverty, and Mrs. Parker was made keenly aware of this in 2015 when a family asked her for help. As Mrs. Parker told the TODAY Show, “I had a family come to me and say, ‘We don’t know how we’re going to eat. Can you please help us?’” She learned that many more families also relied on school meals, and hunger during school breaks were a real concern. And thus, she began the Bull City Foodraiser. Starting as a small project to help feed the students in Mrs. Parker’s class in 2015, the Foodraiser today serves over 5,000 students in Durham Public Schools who receive free or reduced-price lunch.

NEA presents the Reg Weaver Human and Civil Rights Award to a nominee whose activities around closing the poverty gaps for children in America and around the world have made a significant impact in helping poor students and eliminating poverty.
Learn more

Because of this activism against food insecurity and poverty for children across the City of Durham, Turquoise LeJeune Parker exemplifies the spirit of former NEA President Reg Weaver, for whom this award is named. President Weaver was famous for paying for students’ needs as a classroom teacher, and later for spotlighting the needs of students living in poverty. Mrs. Parker is doing the same today. Not only is she paying for student meals from her own pocket, but she is also encouraging members of the community across Durham to do the same.

The Foodraiser is a major achievement, but Mrs. Parker’s work to eradicate poverty and support equitable learning environments does not stop there. Within her local, the Durham Association of Educators, and with the North Carolina Association of Educators (NCAE) Organize 2020 Caucus, Turquoise has organized her colleagues and other public education allies to speak out against harmful legislation, to have key conversations with lawmakers, and to advocate for the schools our students deserve.

Mrs. Parker brings the world to her students and crafts a place where they can demonstrate their brilliance, no matter their ZIP code or income level. She partners with Book Harvest, a non-profit in Durham, to ensure that every student has access to literature, and she uses that partnership to help develop her students as authors. She has taken her students to Historically Black Colleges and Universities to broaden their horizons about extended learning opportunities. Through these actions, she has deeply invested in these students, constantly showing them that they matter and that they will indeed change the world.

“To be a Parker Professor is a life-changing experience for students who are fortunate to have Turquoise as an educator. For every student who experiences life in poverty, it is my hope that they experience an educator like Turquoise,” NCAE President Tamika Walker Kelly expressed. Every student deserves an educator who will ensure they have everything they need to thrive, even if it means collecting and spending over $100,000 at Costco on food while also advocating for anti-poverty and equitable opportunity legislation.